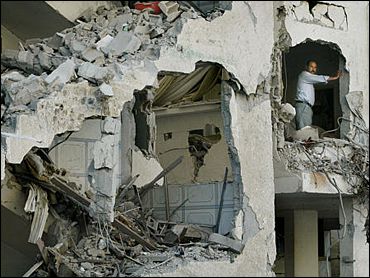 Hundreds of Israeli troops fanned out along the Egyptian border Thursday to search for remains of five comrades killed in the bombing of a military vehicle, while Israeli missile strikes on a Palestinian refugee camp killed 11 people and wounded 29 others.

Israel is in shock after the two armored personnel carriers were blown up, reports CBS News Correspondent Robert Berger. The loss of 11 soldiers in as many days is significant in such a small country.

"It is an opportunity to open a full scale war against the Palestinian Authority and to wipe them out," he said.

But a bereaved father of one of the soldiers harshly criticized the government, giving new sting to the debate.

Shlomo Vishinsky, a well-known actor, blamed Prime Minister Ariel Sharon's Likud Party for his son Lior's death, saying the young man had been a "patsy" of the party's hard-line policies.

"I want the funeral cortege to leave from the Likud headquarters, so that Lior's death will not have been in vain, so that other mothers will not have to suffer," he told the Yediot Ahronot daily. "It's clear that no one wants to be in Gaza, except the members of the Likud."

Sharon has called for evacuating Gaza and uprooting the 21 Jewish settlements there. But Likud members — less than 2 percent of Israel's population — overwhelmingly rejected the proposal in a nonbinding vote on May 2.

Opinion polls have shown that a solid majority of the general public favored the plan, and Sharon has pledged to push forward with the proposal.

Dovish Israeli politicians said the violence would persuade Israelis of the need to leave Gaza. A similar debate over Israel's occupation of southern Lebanon — a bloody war against Hezbollah guerrillas — led to an Israel withdrawal in 2000.

Early Thursday, Israeli forces pulled out of Gaza City following the biggest offensive in the area in years. The military said it had completed its search for body parts from six soldiers killed in the first bombing, a huge explosion that destroyed an armored vehicle on Tuesday.

The army left behind a swath of destruction in Gaza City: A multi-story building was destroyed, scores of houses were damaged, agricultural land was uprooted and local infrastructure was pulverized.

The army said the damage resulted from Palestinian resistance and the impact of the explosion that destroyed the armored vehicle. "There was a lot of collateral damage over a large area," said military spokeswoman Maj. Sharon Feingold.

The escalating violence renewed debate in Israel over its continuing presence in Gaza, where 7,500 Jewish settlers live among 1.3 million Palestinians. Israeli commentators said the violence was increasingly reminiscent of Israel's guerrilla war in Lebanon that ended with a sudden pullout in 2000.

Following Wednesday's armored vehicle attack, as many as 1,000 Israeli soldiers and dozens of tanks and armored personnel carriers fanned out in the border area between Gaza and Egypt.

The forces continued to search Thursday for body parts, which were scattered over a large area, and secured the narrow road near the Rafah refugee camp where the attack took place.

Israeli officials said Egypt was assisting in the recovery effort. Lt. Gen. Moshe Yaalon, the army chief, told Israel Radio that Cairo had agreed to allow army rabbis to search for remains on the Egyptian side of the border.

The vehicle that exploded was carrying a ton of explosives, used to blow up weapons-smuggling tunnels between Egypt and Gaza, military sources said. The army said it had been attacked by a rocket-propelled grenade.

The force of the blast sent body parts flying up to a half a mile away, the sources said, speaking on condition of anonymity.

The dual attacks dealt a tough blow to the standing of Israel's military and raised new questions about its continuing presence in Gaza.

Palestinians said a 19-year-old man in Rafah was killed by Israeli gunfire.

The army said it had fired missiles at armed militants. Residents said at least four of the dead were militants.

Later Wednesday, Israeli gunboats shelled the Gaza shoreline and a new helicopter strike reportedly killed at least one Palestinian and injured another dozen.

The bloody back-to-back attacks on Israeli forces in Gaza reversed a trend of "routine" Israeli operations in Palestinian areas in recent months, in which dozens of Palestinians were killed and wounded but Israeli casualties were few.

Israel pulled out of the city's Zeitoun neighborhood after militants agreed to return soldiers' body parts in a deal worked out with the Palestinian Authority and Egypt.

"President Arafat issued clear cut instructions to all our security forces to do so and to exert maximum efforts for these body parts to be returned," said Palestinian Cabinet Minister Saeb Erekat.

The Palestinians were worried about their image, reports Berger, fearing that the militants parading body parts would put them in the same category as the terrorists in Iraq who beheaded American Nick Berg.

Though some of the corpses were incomplete, the army said late Wednesday that pathologists positively identified all six soldiers, and five were being buried on Thursday in Israel. The sixth, Sgt. Jacob Marvitzah, will be buried in Serbia in accordance with the wishes of his mother, who lives in Yugoslavia.

In Zeitoun, thousands of people attended the funerals of people killed in the Israeli offensive. They waved Palestinian flags and chanted anti-Israel slogans.