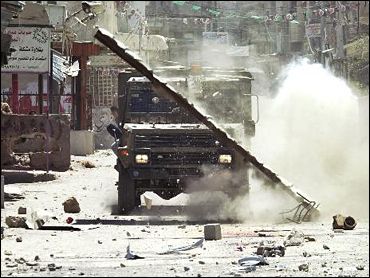 It was the second such bombing in two days. On Tuesday, six Israeli soldiers were killed when their armored personnel carrier was shredded by a roadside bomb in Gaza City.

The military said the vehicle was patrolling an Israeli-controlled road, the Philadelphia Route, on the border when the bomb went off. The road runs along the Palestinian refugee camp of Rafah, scene of almost daily battles. Israel repeatedly targets Rafah, trying to destroy weapons smuggling tunnels.

On Wednesday, Israeli troops fired missiles, demolished buildings and burst into homes in a densely populated Gaza City neighborhood in a bid to recover the remains of the six.

A Palestinian militant group said Wednesday it reached agreement with Israel on the return of the remains. There was no immediate Israeli army comment. According to Israel's Haaretz newspaper, in return, Israel will have to immediately withdraw from the Zeitoun neighborhood of Gaza City.

Some Palestinians were worried about their image, reports CBS News Correspondent Robert Berger: parading remains puts them in the same category as the Islamic militants who beheaded the American in Iraq and who killed American civilians in Fallujah, Iraq, and desecrated the bodies.

The Philadelphia Route is a narrow 50-yard-wide strip that runs between Palestinian Rafah and Egyptian Rafah. Israel retained control of the strip under the Oslo Accords.

Five Palestinians were killed and 43 others, mostly civilians, were wounded in Wednesday's fighting, the biggest Israeli offensive into Gaza in years. No Israeli casualties were reported.

By mid-afternoon, the army was in control of a two-square-mile area and was within 400 yards of the center of Gaza City, Palestinians said.

Israel had promised a harsh reprisal following the bombing Tuesday of an Israeli armored vehicle that killed the six soldiers and scattered their remains. After the attack, Palestinian militants flaunted soldiers' body parts for TV cameras.

The Palestinian Authority, along with Egypt, urged Hamas and Islamic Jihad militants to return the remains. Defiant militants said there would be no release until Israel pulled its troops out of the area.

Simon Schorno, a spokesman for the International Committee of the Red Cross, said the group had been acting as an intermediary. He declined to say whether any progress had been made.

Militants, speaking on condition of anonymity, said a key sticking point was a soldiers' head that was displayed Tuesday. Israel demanded its return, but militants refused.

Islamic Jihad spokesman said under the deal, Israel would pull its troops out of Gaza City and return bodies of Palestinian militants in exchange for the body parts.

Israel said it would not negotiate with the militants and vowed to continue its operation until it recovers the bodies.

"Anyone who desecrates (the bodies of) soldiers, we shall catch them, and our settling of accounts with them will be bitter and precise," said Israeli Defense Minister Shaul Mofaz told Channel 10 TV.

Israel is known for going to great lengths to recover the bodies of fallen soldiers, both because Jewish law requires the body to be buried intact and the army fears militants will try to use the remains as bargaining chips.

Israel has carried out a number of lopsided prisoner deals. Most recently, it exchanged hundreds of Arab prisoners in January for the remains of three soldiers and a captured businessman.

After an overnight lull, the heavily armed Israeli forces, backed by tanks and combat helicopters, resumed their searches for body parts shortly after daybreak.

Gun battles erupted. Soldiers confined tens of thousands of residents in the densely populated Zeitoun neighborhood — scene of Tuesday's explosion — to their homes.

Israeli helicopters fired two missiles during the fighting. One hit a building, wounding nine people. The second hit a crowd of people gathered outside a mosque, killing three Hamas members and wounding 28 others, mostly civilians. Two girls were among the wounded.

The army said both attacks were aimed at militants planting bombs.

In other violence, the army said it killed a man who tried to fire an anti-tank missile. Palestinians said a 35-year-old felafel salesman died after being hit by an Israeli bullet. The army had no immediate comment.

Throughout the day, soldiers stormed dozens of shops and garages, scouring rooftops and balconies for body parts.

The army also told Palestinian officials that it had shut down Gaza's border crossings into Egypt and Israel and barred Palestinian fishermen from going to sea.

In fighting Tuesday, at least eight Palestinians were killed. Palestinian residents said another person was killed Tuesday and buried under rubble, but the report could not be independently confirmed.

Saed Abdullah, a 45-year-old father of six who lives near the site of Tuesday's explosion, said he and his children had spent hours hiding under beds as bullets penetrated the house, shattering windows and destroying furniture.

Soldiers stormed the house, locking the family into a room for more than five hours, Abdullah said. Then they took him and two other neighbors and used them as "human shields" as they searched the neighborhood, he added.

"The factions should hand over the bodies because the message has reached the world that we have defeated the Israeli army," Abdullah said.

The six soldiers' deaths — the most killed in a single army operation since November 2002 — renewed debate in Israel over Prime Minister Ariel Sharon's proposal to withdraw from Gaza. The area is home to 7,500 Jewish settlers and some 1.3 million Palestinians.