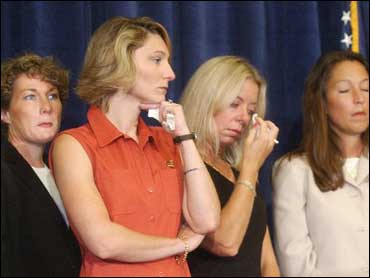 Some 600 relatives who lost loved ones in the Sept. 11 terrorist attacks have filed a $100 trillion lawsuit against the Sudanese government and Saudi officials, banks and charities, claiming they helped finance Osama bin Laden's network.

However, lead attorney Ron Motley said Friday that the $100 trillion complaint was being amended and would likely be scaled down asking for damages in excess of $1 trillion in future filings.

"It's not the money. We want to do something to get at these people," said Irene Spina, whose daughter, Lisa L. Trerotola, 38, died in the World Trade Center in New York City. "There's nothing else we can do."

"This is the right thing to do," said Matt Sellito, father of Matthew Carmen Sellito, 23, who also died at the World Trade Center. "If the odds are stacked against us, we will beat them."

The 15-count federal lawsuit seeks to cripple banks, charities and some members of the Saudi royal family as a deterrent to terrorist financing schemes.

The suit was filed Thursday in U.S. District Court in Alexandria, Va., on behalf of the families. The complaint charges the defendants with racketeering, wrongful death, negligence and conspiracy.

Motley said the money likely would come largely from assets held by the defendants in the United States. He said the plaintiffs were after more institutions than those whose assets already have been frozen by the U.S. and other governments.

Another attorney in the case, Allan Gerson, said Friday that one aim of the lawsuit was to choke off the financial support for terrorist networks.

"Until now, sponsoring terrorism has been a cost-free operation," Gerson said on CBS News' "The Early Show." He said "we intend to stop that."

The lawsuit is likely to cause post 9-11 friction between the U.S. and Saudi Arabia, reports CBS News Chief Washington Correspondent Bob Schieffer.

The Bush administration has been careful not to blame the Saudi government for the attacks in its drive to build a coalition for its war against terrorism. But the relatives' lawsuit bluntly accuses Saudi officials and institutions of supporting terrorists.

"That kingdom sponsors terrorism," Motley told reporters. "This is an insidious group of people."

Officials from the Saudi Embassy did not return a call for comment.

Prince Saud al-Faisal, the Saudi foreign minister, said last week that the 70-year-old U.S.-Saudi alliance was as solid now as before the Sept. 11 attacks on the United States.

He said bin Laden, who was stripped of Saudi citizenship and is accused of directing the al Qaeda attacks, had intended to drive a wedge between the two countries when he chose 15 Saudi citizens to be among the 19 hijackers.

Several plaintiffs, fighting tears, said they would dedicate the rest of their lives to punishing those who financed the hijackings and crashes of four U.S. commercial jets on Sept. 11.

"We will succeed because we have the facts and the law on our side," said Thomas E. Burnett Sr., whose son, Thomas E. Burnett Jr., led a passenger revolt against the hijackers of United Airlines Flight 93 and died when it plummeted to the ground in a southwestern Pennsylvania field.

"We have justice and morality on our side," he added.

Burnett's mother, Deena, said her son told her in a phone call that he was "putting a plan together that he and others were going to take back the airplane."

"And he said, 'You know Deena, I think we can do it. It's up to us,' she said. "Those words resonate in my mind. And I think we're going to do something, too. And this is a good start."