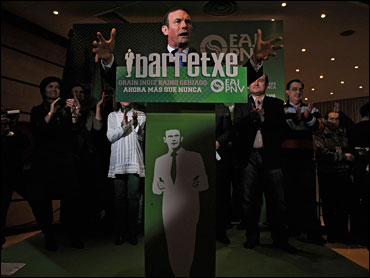 Non-nationalists won more parliamentary seats than Basque nationalists in elections in Spain's most turbulent region Sunday, in a result that could usher in the region's first non-nationalist government in 30 years.

The ruling Basque Nationalist Party actually gained a seat to win 30 in the 75-seat parliament. But three smaller nationalist allies lost seats, leaving the coalition with a total of 37 seats - one short of the needed majority, electoral officials said on television and radio with close to 100 percent of the votes counted.

In contrast, Spain's Socialist party gained six seats to end with 24, and its allies the conservative Popular Party and the Democracy Union Party won 13 seats and one respectively, electoral officials said on state and regional television and radio. If the three parties agree to link up they will control 38 seats, enough for a parliamentary majority.

The results could mean a major reversal for the Basque Nationalist Party, which has ruled this semiautonomous northern region of Spain since 1979 on a platform that courts separatist sentiments. The Socialists ran a campaign to retain strong links with central government.

The new Basque parliament will be the first to exclude radical nationalist parties supporting the armed separatist group ETA, which has killed more than 825 people during a violent separatist campaign since the late 1960s to try to establish an independent Basque country straddling northern Spain and southwestern France.

The Madrid-based Supreme Court in February barred candidate lists submitted by two parties - Askatasuna and Demokrazia 3 Milioi - on the ground that they are directly linked to the banned Batasuna party. Batasuna was outlawed in 2003 for being the political wing of ETA.

Hardline separatists have complained that the exclusion made Sunday's vote undemocratic. "These elections are a farce, they exclude 15 percent of the Basque electorate," said English-language teacher Karmele Viteri, 30, after casting her vote.

Around 1.7 million Basques are eligible to vote.

"It's good that they haven't allowed people to vote for ETA murderers, anything else would be a mockery. I hope ETA stops existing now," said 63-year-old Marta Linares.

The Basque Nationalist Party, which rejects ETA's violence, insists Basques have the right to decide by referendum whether to remain part of Spain or break away.

"I've voted so that we can have a parliament that'll give us Basques the right to decide if we want to continue as part of Spain or not," said Emilio Ibanez, 40, an industrial engineer.