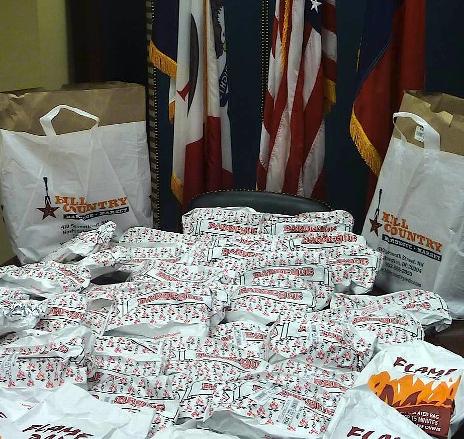 A pair of Republican senators on Monday protested a Department of Agriculture call for participation in a "Meatless Mondays" initiative by ordering staffers beef brisket, ribs, and sausage from a Washington barbeque restaurant.

"In some of the toughest times they've seen in recent memory, Texas cattle ranchers and farmers deserve an Administration who works with them, not one who undermines them with boneheaded decisions from bureaucrats in Washington," Sen. John Cornyn of Texas said in a statement.

Added Sen. Chuck Grassley of Iowa: "This is a reminder to USDA that it's supposed to advocate for American agriculture, not against it."

The cattle-state senators, who ordered the food from Hill Country Barbecue, were responding to a message published in a USDA interoffice newsletter last week that read, "One simple way to reduce your environmental impact while dining at our cafeterias is to participate in the 'Meatless Monday' initiative."

Meatless Monday, which comes in part from the Johns Hopkins School of Public Health, is designed to encourage Americans to eat less meat to reduce their risk of cancer, diabetes and other diseases while benefiting the environment.

The USDA's call for employees to participate in Meatless Monday prompted anger from the meat industry and a backlash online; among those who complained on Twitter was Iowa Republican Rep. Steve King, who posted, "USDA HQ meatless Mondays!! At the Dept. of Agriculture? Heresy! I'm not grazing there. I will have the double rib-eye Mondays instead."

Last Tuesday, the USDA retracted the call for employees to participate in Meatless Monday, saying the appeal had been posted without proper clearance. A copy of the newsletter, which was taken offline, can be found here.

Grassley aide Jill Kozeny told the Des Moines Register that the senator was eating meat throughout the day, including a beef sandwich at lunch.

"Sen. Grassley didn't have meat for breakfast but he had some beef jerky after lunch, for good measure, and he's planning on a steak tonight," she said.