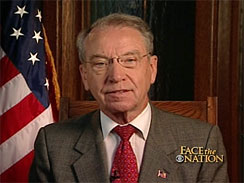 (CBS)
Two leading senators on the Senate Finance Committee, which is expected to begin marking up health care legislation next week, said a bipartisan agreement is possible by the Congress' summer recess, though neither seemed to be letting up their arguments on "Face the Nation" Sunday.

As ranking Republican on the committee, Senator Charles Grassley of Iowa (left) has been an opponent of a government-funded health care option.

"I am going to make sure we are not going to nationalize health insurance, and a public plan is the first step to doing that," Grassley told guest moderator John Dickerson Sunday.

He also said that a policy which mandates employer-based health care coverage would endanger small business.

Grassley said that the existing private health care model can be made more affordable by ruling out "discrimination" against pre-existing conditions and providing financial assistance to low income families.

Senator Charles Schumer (D-N.Y.), a leading Democrat on the committee, advocates for a public option which, he claims, would keep private insurance providers "honest." 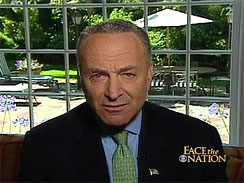 (CBS)
"[W]ithout a public option, you're going to have no competition," Schumer (left) argued. "We don't trust the private insurance companies left to their own devices, and neither do the American people.

"I am not saying that the public option should be the only option … but we should not say there should be no public option" he said, advocating for a health care policy "exchange."

Both senators see the option of an alternative patient-owned cooperative system as a possible point of agreement between committee members.

Schumer said he does not care what you call the alternative to private health insurance companies, as long as they provide competition and are national.

Grassley charged that Schumer "doesn't want to go too far on pushing the federal government" because it is a "political problem."

Meanwhile, Schumer said no one can "take things off the table" in this agreement, an obvious attack on Grassley who has said the public option would be a deal breaker.

On another matter, Dickerson asked Senator Grassley, whose state caucus is the first stop for presidential candidates, what he thought of Governor Sarah Palin's (R-Alaska) announcement that she was leaving office before her term ended.

"It's astounding" he said frankly.

"I would think, if you want to run for president — and I'm not sure that's got anything to do with what she's doing — that the forum of a governorship would be a better forum than just being a private citizen," Grassley argued before saying, "I'd welcome her to be a candidate for president."

To watch Senators Grassley and Schumer on "Face the Nation" click on the video player below.