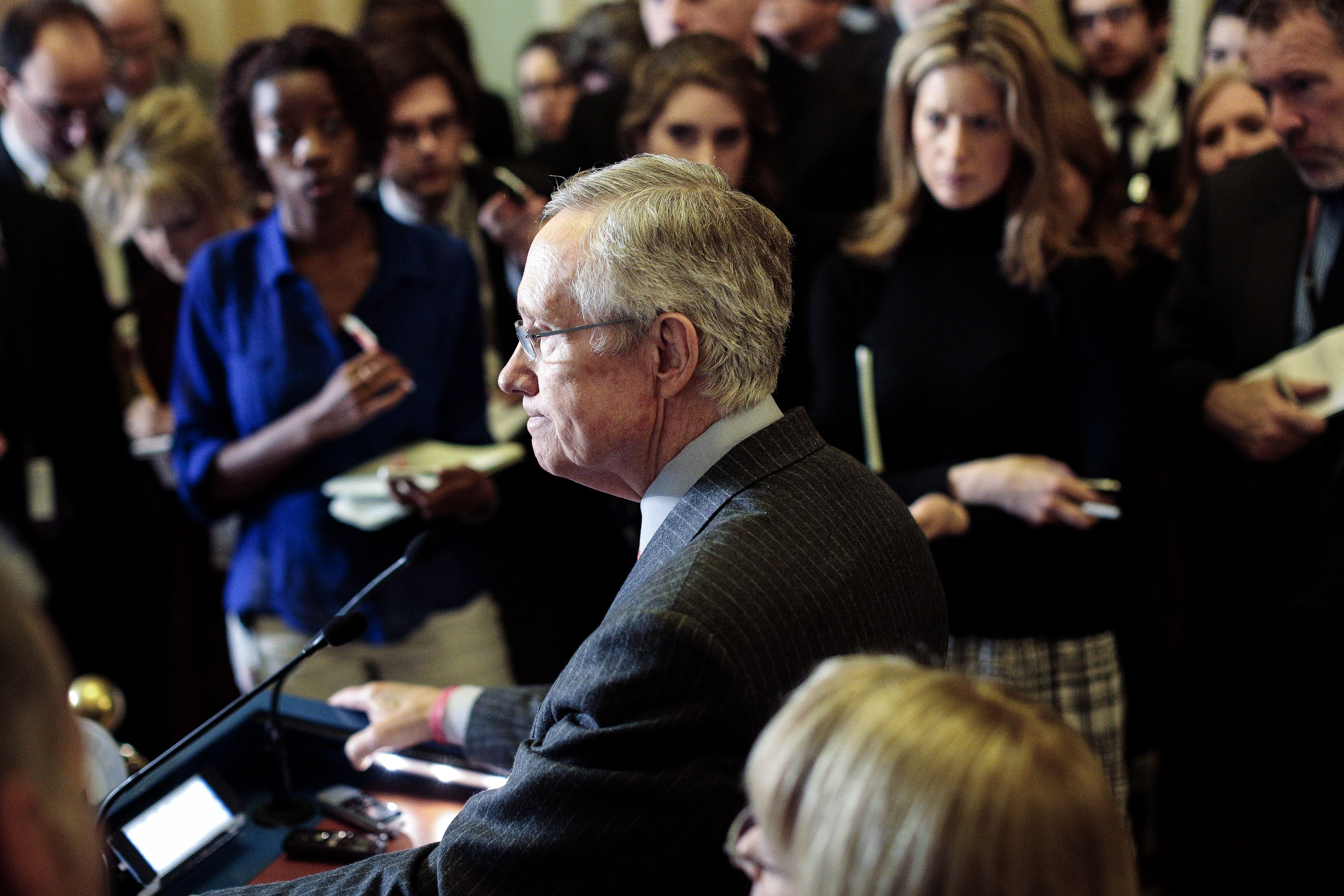 After a protracted and vigorous White House campaign to secure a congressional vote on its gun safety proposals, the Senate is poised to hold an initial vote Thursday on a bill that would strengthen background checks for gun buyers, Sen. Majority Leader Harry Reid, D-Nev., announced Tuesday.

Speaking to reporters after a meeting with the Senate Democratic Caucus this afternoon, Reid said he would file for cloture on the bill this evening, and that no matter what, he'll make sure all of the measures for which Democrats are pushing - including the assault weapons ban, a ban on high-capacity magazine clips, and a measure making gun trafficking a federal crime - will get Senate votes eventually.

"If they don't invoke cloture -- help me invoke cloture on this bill, we're going to vote on these things anyway," Reid warned. "It'll take a little bit of time, but as I've said for months now, the American people deserve a vote on background checks, on federal trafficking, on safety in schools, on the size of clips, and, yes, assault weapons, and, of course, mental health."

Reid, a pro-gun Democrat who has embraced the Obama administration's push for Senate passage of comprehensive gun safety laws, lauded the efforts of conservative Sen. Joe Manchin, D-W.Va., for his recent negotiations with Republican senators Pat Toomey, R-Pa., and Mark Kirk, R-Ill., on language that might make the bill more palatable to Republican lawmakers. But he noted that he won't wait on their agreement before holding a vote on the bill -- particularly since they don't appear to have come to one yet.

"I admire Senator Manchin for stepping out and trying to do something constructive. I hope that something works out with him and Kirk and Toomey," he said. "I would like that to be a first -- or one of the first amendments offered if we get on the bill. But in the meantime, we're going to move forward."

Reid's announcement comes amid reporting that at least six Republican senators do not plan to support a filibuster, which suggests that Reid can get the 60 votes needed to ensure a vote. It had been previously suggested that Reid would delay the vote until next week.

Despite what appears to be growing momentum for the Obama-backed bill, however, it still faces staunch opposition from the right: Just minutes before Reid's announcement, Senate Minority Leader Mitch McConnell, R-Ky., explained why he plans to join his conservative colleagues in filibustering the bill.

"The particular bill that - that the majority leader has indicated he may call up is one that came out of the Judiciary Committee on a partisan vote," McConnell told reporters."That was my view on that."

McConnell yesterday joined 12 other Republican senators who have pledged to block the committee-passed bill, inciting the wrath of Democrats who say Americans deserve to see where their lawmakers stand on the issue.

"It would be appalling if commonsense legislation supported by 90 percent of the American people, by something like 80 percent of Republicans, 80 percent of gun-owners, were to be filibustered," said White House spokesman Jay Carney in a press briefing Tuesday. "Have the courage of your convictions and allow a vote and vote no, if you want to vote no, vote no. How you can tell the families of Newtown victims, some of whom are here today trying to urge members of the Senate to pass or at least vote on these commonsense measures, that the memory of their children doesn't deserve at least that?"

Sen. Ted Cruz, R-Tex., one of the Republicans who says he'll block the bill, argued that the Reid bill would restrict Americans' right to bear arms, and that "any bill that would undermine the Bill of Rights, in my opinion, should be subject to a 60 vote threshold."