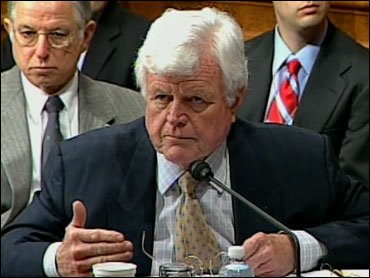 The Republican-controlled Senate refused Wednesday to raise the minimum wage, rejecting an election-year proposal from Democrats for the first increase in nearly a decade.

"I don't think the Republicans get it," said Sen. Edward M. Kennedy, D-Mass., who backed a proposal for a three-step increase in the current wage floor to $7.25 an hour. The federal minimum wage has been fixed at $5.15 an hour since 1997.

The end of this year will mark the longest stretch the minimum wage has stayed flat since it was established in the 1930s, CBS News correspondent Bob Fuss reports.

Democrats complain that inflation has pushed workers at the minimum, many of them single women with children, deeper into poverty. Republicans counter that the market should control wages and raising the minimum would result in fewer low-skill workers getting hired.

"This is a classic debate between two different philosophies. One philosophy believes in the marketplace, competition and entrepreneurship, and the second is a philosophy that says government knows best," said Sen. Johnny Isakson, R-Ga. He said France and Germany have high minimum wages, but also high unemployment.

But Kennedy and other advocates of an increase said minimum wage workers have been without a raise since 1997.

"Our failure to act is a moral outrage. Today's minimum wage is not a just wage. The people who earn the minimum wage are being exploited and that is wrong," he said.

Underscoring the political context of the debate, he said if Democrats win the Senate this November, a minimum wage increase will be one of the first pieces of legislation to be considered.

Supporters of the Democratic proposal for an increase included 43 Democrats, eight Republicans and one independent. All the votes in opposition were cast by Republicans.

In a followup vote, the Senate rejected a Republican alternative that would have raised the minimum wage by $1.10, and would have included a provision allowing flextime for workers as well as several elements providing tax and regulatory relief for small businesses. It drew 45 votes, 15 short of the 60 needed. There were 53 votes in opposition.