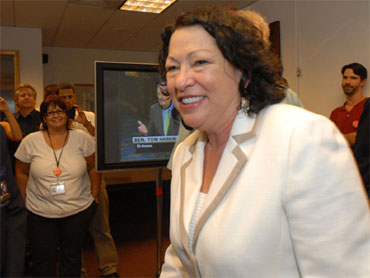 In a history-making vote, the Senate has confirmed Sonia Sotomayor as the Supreme Court's first Hispanic justice.

The vote was 68 to 31, with nine Republicans voting in favor of President Obama's first Supreme Court nomination. Sen. Ted Kennedy, D-Mass., who is suffering from brain cancer, was not present.

All 57 Democrats present voted for the nomination, along with the Senate's two independents.

CBS News correspondent Wyatt Andrews reports that Republicans who opposed her were under pressure from their conservative base and from the NRA, but said the judge had revealed an ethnic bias that would lead to rulings not based in law… "but in the subjective realm of personal quote opinions, sympathies and prejudices," as Sen. Jeff Sessions, R-Ala., put it.

It was not quite as bipartisan as the vote for Chief Justice Roberts at 78-22 but ten votes higher than the 58-42 vote for Justice Samuel Alito, reports Andrews.

"She ends up with more votes than Samuel Alito and fewer votes than John Roberts, and in the end no one is going to remember the margins," said CBS News legal analyst Andrew Cohen. "She'll now prepare to settle in to the court, and to a new city, and I'm sure she's already had a peek at some of the briefs in cases she'll begin to help decide when the new term begins in a few weeks." (Read more instant analysis from Cohen)

After the vote, Mr. Obama said he was "pleased and deeply gratified."

The president also thanked the Senate Judiciary Committee for giving Sotomayor "a thorough and civil hearing."

On his way out following his prepared statement, CBS News White House correspondent Mark Knoller asked Mr. Obama whether he was happy with 68 votes for Sotomayor.

The 55-year-old daughter of Puerto Rican parents was raised in a South Bronx housing project and educated in the Ivy League before rising to the highest legal echelons, spending the past 17 years as a federal judge.

Sotomayor was nominated by Mr. Obama on May 26 -- two months and 11 days from today. She will be sworn in on Saturday. (Read more on the confirmation times of other recent justices)

Senators took the rare step of assembling at their desks on the Senate floor for the historic occasion, rising from their seats to cast their votes. The chamber's newest senator, Democrat Al Franken of Minnesota, was in the chair running the proceedings.

"She's not likely to have a huge impact on the Court's ideological makeup because in some ways she's the same sort of moderate liberal that her predecessor, David Souter was. And you can even argue that she is likely to be more conservative than he was in certain kinds of cases, like business or law enforcement cases," Cohen said.

"The real test for the White House and the Congress will come when the president of one party has to overcome a Senate controlled by members of the other party. That didn't happen here, it didn't happen with Justices Alito or Roberts, either, and if it does happen down the road we will the sort of political bloodbath we haven't seen since the Bork and Thomas confirmations," he added.

A majority of Republicans lined up against her, arguing she'd bring personal bias and a liberal agenda to the bench. But Democrats praised Sotomayor as an extraordinarily qualified mainstream moderate and touted her elevation to the court as a milestone in the nation's journey toward greater equality and a reaffirmation of the American dream.

Democrats also warned Republicans that they risk a backlash from Hispanic voters - a growing part of the electorate - for opposing her. But Republicans bristle at the suggestion, noting that Democrats used extraordinary measures several years ago to block the confirmation of GOP-nominated Miguel Estrada, a Honduran-born attorney, to the federal bench.

Minutes before the vote, Sen. Robert Menendez of New Jersey, the Senate's lone Hispanic Democrat, said, "History awaits, and so does an anxious Hispanic community in this country."

"When she places her hand on the Bible and takes the oath of office, the new portrait of the justices of the Supreme Court will clearly reflect who we are as a nation, what we stand for as a fair, just and hopeful people."

GOP senators say their opposition to Sotomayor is based on her speeches and record, pointing to a few rulings in which they argue she showed disregard for gun rights, property rights and job discrimination claims by white employees. They also cite comments she's made about the role that a judge's background and perspective can play, especially a 2001 speech in which she said she hoped a "wise Latina" would usually make better decisions than a white man.

Republicans have been particularly critical of Sotomayor's position on the Second Amendment right to keep and bear arms. She was part of a panel that ruled this year that the amendment doesn't limit state actions - only federal ones - in keeping with previous Supreme Court precedent. But gun rights supporters said her court shouldn't have called the issue "settled law," and they criticized her for refusing during her confirmation hearings to go beyond what the high court has said and declare that the Second Amendment applies to the states.

Her writings and speeches "reflect a belief not just that impartiality is not possible, but that it's not even worth the effort," said Sen. Mitch McConnell, R-Ky., the minority leader. "In Judge Sotomayor's court, groups that didn't make the cut of preferred groups often found that they ended up on the short end of the empathy standard."

The National Rifle Association is strongly opposing her and has threatened to downgrade any senator who votes to confirm Sotomayor in its closely watched candidate ratings. The warning has made little impact on Democrats, many of whom have rallied behind the judge despite their perfect or near-perfect ratings from the NRA, but it may have influenced some Republicans who were initially considered possible supporters but have since announced their opposition, citing gun rights as a key reason.

The handful of Republicans who are backing Sotomayor say that while they disagree with some of her views and rulings, they believe she's well-qualified. Sen. Kit Bond of Missouri said partisanship has no place in debates over judges.

Sen. Judd Gregg, R-N.H., added that politicizing the confirmation process - as he argued Democrats did when they blocked GOP nominees in the past - "undermines the public's views of our courts and the integrity of our judicial system."

"Judge Sotomayor's decisions, while not always the decision I would render, are not outside the legal mainstream and do not indicate an obvious desire to legislate from the bench," said GOP Sen. George Voinovich of Ohio.

Sotomayor watched the vote unfold on large-screen televisions in a conference room at the federal courthouse in lower Manhattan with other judges and courthouse personnel. Sotomayor has worked in the building for years, first as a district judge and then on a federal appeals court. When the vote came in, the crowd stood up and screamed.

Spectators said a misty-eyed Sotomayor fielded a call from her mother only moments after her confirmation was announced. She was overheard saying, "Mommy, I have people here," before having a brief conversation in Spanish.

As the gathering broke up, a beaming Sotomayor brushed off questions from reporters, telling them, "I'm going to be with my friends."

She was mobbed in the hallway by admirers - many wearing buttons reading "Justice Sonia" - who hugged her and jockeyed to pose with her for cell phone photos. After about 30 minutes, the newest justice disappeared into an elevator under the close watch of deputy U.S. marshals.

Obama "Filled With Pride" Over Sotomayor

Andrew Cohen: Sotomayor Confirmation an "Easy One" for White House

Sotomayor Confirmed in Below Average Time