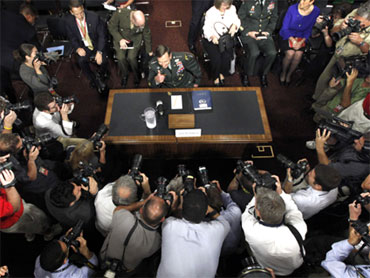 The Senate unanimously confirmed Gen. David Petraeus Wednesday as the new commander of the Afghanistan war. The vote was 99-0.

President Barack Obama nominated Petraeus to take over from Gen. Stanley McChrystal, fired last week for disparaging remarks about his civilian bosses in a magazine article.

The Senate Armed Services Committee quickly approved Petraeus for the job of running the nine-year-old war following a hearing Tuesday that focused more questions about U.S. strategy and a possible withdrawal timetable than whether Petraeus would be confirmed.

Petraeus currently oversees the wars in both Afghanistan and Iraq as head of U.S. Central Command, meaning that his new role leading the of International Security Assistance Force and lead U.S. forces in Afghanistan is technically a demotion.

But the general is popular with members of both parties and was seen as one of the only people that could seamlessly take the reins from McChrystal. His confirmation was widely expected. His replacement at Central Command has not been announced.

"For those who doubt the president's desire and commitment to succeed in Afghanistan, his nomination of Gen. Petraeus to run this war should cause them to think twice," said Sen. John McCain, the top Republican on the Senate Armed Services Committee.

"I know that Gen. Petraeus will do everything in his power to help us succeed in Afghanistan," McCain added.

Speaking to the Armed Services Committee Tuesday, Petraeus left open the possibility of recommending that President Barack Obama delay his plans to start withdrawing U.S. troops from Afghanistan next summer if the new commander cannot turn around the stalemated war.

"There will be an assessment at the end of this year after which undoubtedly we'll make certain tweaks, refinements, perhaps some significant changes," he said.

Obama has said troops will begin to leave in July 2011, but that the pace and size of the withdrawal will depend upon conditions.

As CBS News National Security correspondent David Martin reports, Petraeus pointed out that the July 2011 date was set last Fall in the president's speech at West Point -- based on projections at the time. Since then, the war has gone slower and harder than expected

Petraeus did not rule out a significant exodus then, as Vice President Joe Biden favors, but he would not promise one either. Petraeus has previously said that he would recommend putting off any large-scale withdrawal if security conditions in Afghanistan can't sustain it.

Petraeus also senators that he may change the war's battlefield rules, designed to limit civilian casualties and improve support for the foreign forces fighting the Taliban-led insurgency. Some troops and congressional Republicans complain they handicap U.S. forces.

"My sense is that the tough fighting will continue; indeed, it may get more intense in the next few months," Petraeus told the Senate panel. "As we take away the enemy's safe havens and reduce the enemy's freedom of action, the insurgents will fight back."