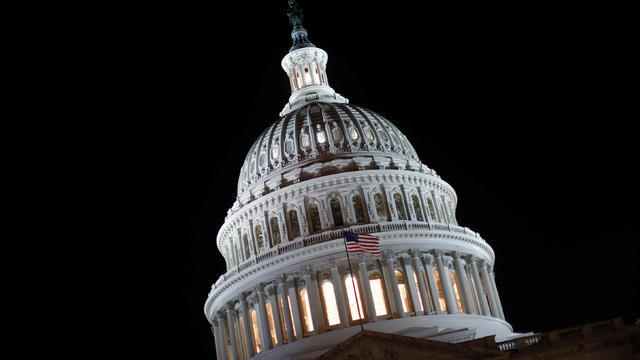 The Senate version of the Republicans' high-stakes tax overhaul is set to be unveiled with billions in tax cuts for people and corporations, repeal of the federal deduction for state and local taxes, and a likely compression of the personal income tax brackets from seven to four.  CBS News' Nancy Cordes reports that senators are considering phasing in the corporate tax cut between now and 2019, and they're considering eliminating the state and local tax deduction, and reducing the number of people who pay the estate tax.

The House measure, meanwhile, nears approval by the tax-writing committee after last-minute changes by its primary author.

The legislation pulling the attention of lawmakers in both chambers would bring the first major reshaping of the U.S. tax code in three decades. Underscoring the political imperative for the Republicans and President Donald Trump, top administration officials met privately with GOP senators Wednesday as Senate tax writers put finishing touches on their bill.

Senate Finance Committee Chairman Orrin Hatch, R-Utah, planned to take the wraps off the new Senate bill on Thursday. A day before, some of its most basic contours were set while others appeared in flux.

In the House, Ways and Means Committee Chair Rep. Kevin Brady was making last-minute changes before the panel votes Thursday to deliver it to the full House. Brady's changes presumably are being made to meet the $1.5 trillion maximum that the bill is allowed to add to the $20 trillion deficit. A preliminary estimate by Congress' nonpartisan Joint Committee on Taxation said the House measure as currently written would add $74 billion more to 10-year deficits than allowed.

The House's tax-writing committee has begun work on the Republicans' overhaul plan, with the panel's chairman calling it a "monumental challenge." Texas Rep. Kevin Brady gaveled in the session on Monday.

With his revisions, Brady, R-Texas, also likely is looking to nail down Republican votes so the House can approve the legislation soon. Democrats are expected to uniformly oppose it.

Brady wouldn't give any hint Wednesday of what might be coming, and committee Democrats could only speculate. "Substantial change is coming in their proposal," Rep. Richard Neal of Massachusetts, the panel's senior Democrat, told reporters.

Neal spoke after the committee's third day of debate on the nearly $6 trillion bill, with the Republican-led panel wading through dozens of amendments and spiking Democrats' efforts to revise it.

As Republican leaders hunted for ways to pay for their tax cuts, Sen. David Perdue, R-Ga., said the Senate measure would fully eliminate the deduction people can take for state and local property, income and sales taxes. The House version would retain the deduction only for property taxes and cap that at $10,000, drawing opposition from GOP lawmakers from states with high local taxes like New York and New Jersey.

Perdue said the Senate plan would compress the current seven personal income tax brackets down to four. On Tuesday, two Republicans had said the bill would retain the seven brackets but cautioned that changes were possible.

Hatch's plan was likely to include a one-year delay in its reduction in the corporate tax rate, which will be permanent, said a GOP aide who spoke on condition of anonymity to discuss internal deliberations. Shrinking that rate to 20 percent from its current 35 percent has been a primary goal of Trump and the business community, and delaying that reduction would help contain the bill's costs.

The tax bill must deepen federal deficits by no more than $1.5 trillion over the coming decade. If Republicans don't meet that, the measure would be vulnerable to a bill-killing Senate filibuster by Democrats that GOP senators lack the votes to block. It also cannot add to red ink beyond the first 10 years without facing the same fate.

Republican leaders' goal is for Congress to send legislation melding both House and Senate versions to Trump by Christmas, in hopes of protecting their congressional majorities in next year's elections.

The drubbing that Republicans received at polls in Tuesday night's elections quickened the urgency. House Speaker Paul Ryan noted Wednesday that the sobering election results "just puts more pressure on making sure we follow through" on the party's drive to overhaul the tax code.

Ryan, R-Wis., spoke after Republicans lost gubernatorial races in Virginia and New Jersey by large margins in off-year elections that appear to be a bad omen for GOP chances in next year's midterms. The tax rewrite effort has assumed even greater significance in the wake of the GOP failure to repeal President Barack Obama's health care law.

The Ways and Means panel voted along party lines against a battery of Democratic proposals to restore to the bill tax benefits for student borrowers, people with significant medical expenses, homeowners and teachers.

The proposed elimination of the deduction for medical expenses not covered by insurance is especially controversial. Several million people facing big medical bills not covered by their insurance would lose a valuable deduction, and groups representing older people and patients are protesting the move.

Republicans have discussed repealing Obama's individual mandate in their tax legislation to raise more money to pay for tax cuts. That mandate requires most people to buy coverage or face a fine.

But the nonpartisan Congressional Budget Office lowered its estimate Wednesday for how much money repealing that requirement would save from $416 billion over a decade to $338 billion.

Repeal would save money because without being forced to get coverage, fewer people would sign up for Medicaid or buy federally subsidized private insurance.