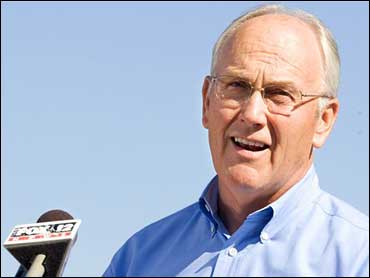 To the dismay of fellow Republicans, Sen. Larry Craig launched a determined drive to save his seat on Wednesday, vowing to stay in office if allowed to withdraw his guilty plea in a men's room sex sting.

Craig's campaign suffered an instant setback, however, when the ethics committee refused to set aside a complaint lodged against him. "Pending Sen. Craig's resignation, the committee will continue to review this matter," the committee's senior senators wrote.

Craig had the following reaction today to a letter sent from the Senate Ethics Committee to Minority Leader Mitch McConnell, according to the statement released by his office:

"It is my intent to fight the case before the Ethics Committee while I am a sitting Senator. I would prefer to have that case resolved on its merits.

"The letter sent today from the Committee to Senator McConnell does not address the arguments laid out by my attorney earlier today. I hope that Committee addresses those arguments sooner, rather than later, so that I can have my name cleared."

Craig's decision to deploy his legal team marked a reversal of his pledge to resign on Sept. 30, and raised the possibility of a protracted legal and political struggle, much of it playing out in public, with gay sex at its core.

The Republican lawmaker, who has represented Idaho for 27 years, announced his intended resignation Saturday but CBS News correspondent Chip Reid reported that privately he was sending out a very different message.

In fact, just minutes before that press conference, he mistakenly called a wrong number and left a recorded message obtained by the newspaper Roll Call and confirmed by CBS News to be the voice of the senator.

"Yes, Billy, this is Larry Craig calling. You can reach me on my cell. Arlen Specter is now willing to come out in my defense, arguing that it appears by all that he knows that I've been railroaded ...," Craig is recorded as saying. "...We've reshaped my statement a little bit to say it is my intent to resign on September 30."

Senate Republican Leader McConnell, R-Ky. said Craig had told him he now intended to remain in Congress if he is permitted to withdraw his guilty plea by Sept. 30. "If he is unable to have that disposed of prior to Sept. 30, it is his intention to resign from the Senate as he expressed last Saturday," he added.

"I thought he made the correct decision, the difficult but correct decision to resign" over the weekend, said McConnell, after he and Craig spoke by telephone. "That would still be my view today."

The GOP leader spoke hours after Craig's attorney, Stanley Brand, asked the ethics committee not to investigate a complaint because events were "wholly unrelated" to official duties.

Committee action eventually would lead the Senate down a path of dealing with "a host of minor misdemeanors and transgressions," Brand added in a letter that was hand-delivered.

In a written reply several hours later, the panel's chairman and senior Republican wrote that Senate rules give the committee authority to investigate lawmakers who engage in `improper conduct, which may reflect upon the Senate.'

"The committee has reached no conclusions regarding the matter," wrote Sen. Barbara Boxer, D-Calif., and John Cornyn, R-Texas. "Pending Sen. Craig's resignation, the committee will continue to review this matter."

A second attorney for Craig, Tom Kelly, was in Minnesota, evidently preparing to file papers seeking to have the senator's guilty plea withdrawn.

Lawyers not involved in the case have said Craig faces a difficult challenge, pointing to Minnesota Rules of Criminal Procedure requiring that a defendant show a "manifest injustice" to withdraw a guilty plea.

In Craig's case, he voluntarily signed a plea agreement that included a provision stating that the court would not accept such a confession of guilt from anyone who believed himself innocent.

The legal fine points aside, Craig's turnabout was the subject of a closed-door discussion among Senate Republicans during the day, and there was fresh evidence of the discomfort his case has caused fellow conservatives.

A dozen conservative activists attending a press conference on one of President Bush's judicial nominees declined to answer questions about Craig, including whether they wished to see him resign or remain in office.

For his part, McConnell turned away questions about Craig's situation. Asked whether fellow Republicans could embrace Craig if he disposed of the case and returned to Washington, the GOP leader said he would not answer hypothetical questions.

Asked if Craig had been disingenuous when he told him on Friday he intended to resign, McConnell declined to say.

And when asked whether Sen. Arlen Specter, R-Pa., had been helpful in resolving the controversy, McConnell said, "You'll have to talk to Sen. Specter about his views."

Specter said Sunday he would like to see Craig "seek to withdraw the guilty plea, and fight the case." Specter, a former prosecutor, said he believes the Idaho lawmaker could be vindicated.

He declined to elaborate further when asked during the day.

"I support whatever Larry does," said Crapo. "Everybody has a right to try to vindicate themselves."

Several officials have said Crapo played a key role in last week's events, serving as an intermediary of sorts between his home state colleague and Republicans in Washington eager to see Craig resign.

The Republican leadership moved aggressively when word of Craig's guilty plea first surfaced, asking the ethics committee to investigate, then prevailing on him to step down from his committee and subcommittee leadership positions.

While Craig is only the latest in a series of Republican senators to become drawn into controversy, he is the only one to have drawn widespread calls for his resignation. McConnell and other critics have denied that their decision to prod him to leave stemmed from the allegation that he had solicited gay sex. They said Craig's case was the only one in which a guilty plea had been entered.

"If he honestly did it, he honestly should think about his morals and do what he has to do," Idahoan Stephen Kirby told CBS Affiliate KBCI. "But if it was entrapment involved or wasn't really that point, he should fight it if he has to."