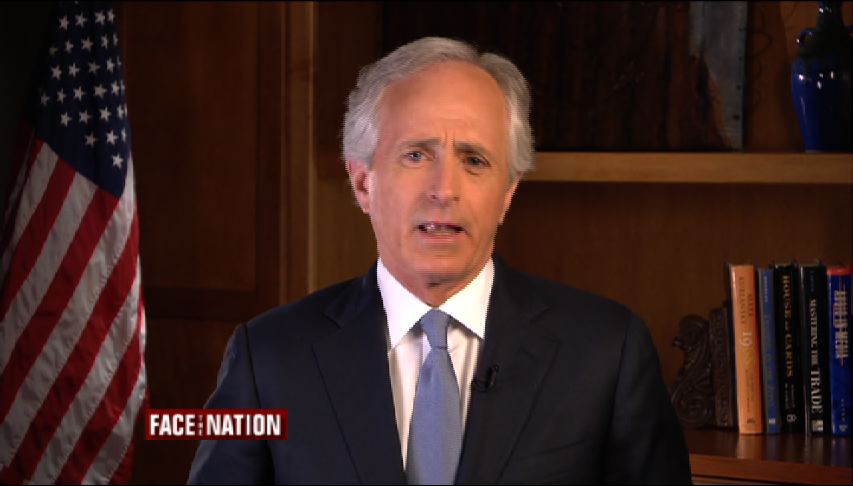 As the U.S. prepares to heighten sanctions against officials in Russian President Vladimir Putin's inner circle, some U.S. lawmakers are arguing that President Obama needs to act more aggressively to stop the destabilization of eastern Ukraine.

In an interview on CBS' "Face the Nation" Sunday, Sen. Bob Corker, R-Tenn., the top Republican on the Senate Foreign Relations Committee, called for the U.S. to levy sanctions against entire sectors of Russia's economy, including targeting four of the largest banks.

"I think these targeted sanctions against individuals just are not affecting Putin's behavior enough," Corker said. "I think we need to put sectoral sanctions in place. I think we need to move those troops away from the border, change the behavior. And I'm very concerned that, as we've seen from this administration on so many tough issues, their policy's always late, after the point in time when we could have made a difference in the outcome."

He said his concerns are shared across the aisle in Congress, and that Sen. Carl Levin, the Democrat from Michigan who serves as the chairman of the Senate Armed Services Committee, has also called on the U.S. to target entire sectors of the Russian economy.

Corker said the U.S.' "red line" on Ukraine has shifted so that the U.S. is merely seeking to ensure Russia does not invade its neighbor and is no longer threatening sanctions if it does not remove troops that have amassed at the border.

"Russia's goal inside Ukraine, is to destabilize the country, to de-legitimize the elections that are taking place on May the 25th," Corker said. "Over time, [Russian President Vladimir Putin] can achieve his goals without actually sending troops in."

Tony Blinken, the deputy national security adviser at the White House, would not say exactly which individuals would be targeted when the U.S. and the Group of Seven nations move to heighten sanctions, which could come as early as Monday. Blinken did, however, give a broad outline of the individuals who would be sanctioned: people in Putin's inner circle, those who have a significant impact on the Russian economy, and the companies that those people will control. They will also consider high technology exports to Russia's defense industry.

"All of this together is going to have an impact," Blinken said in a separate interview on "Face the Nation."

Although Corker has argued that individual sanctions won't change Putin's behavior - they are just "tweaking" the oligarchs, he said - Blinken said they are having a "significant impact" on Russia's economy, with financial markets down 22 percent since the beginning of the year, the ruble at its lowest level ever, and foreign investment sitting on the fence.

Putin, Blinken said, "had a compact with his people and the compact is this: 'I'll deliver economic growth for you if you remain politically complacent.'"

"The compact he has with his people is in great jeopardy. He has to make a very hard choice: He can either continue to do what he's doing in Ukraine, or pull back, engage in the diplomatic process, and take some of that pressure off," Blinken continued.

President Obama has signed an executive order that would give the U.S. the authority to impose sanctions on entire sectors of the economy, but has so far stopped short of invoking that authority.