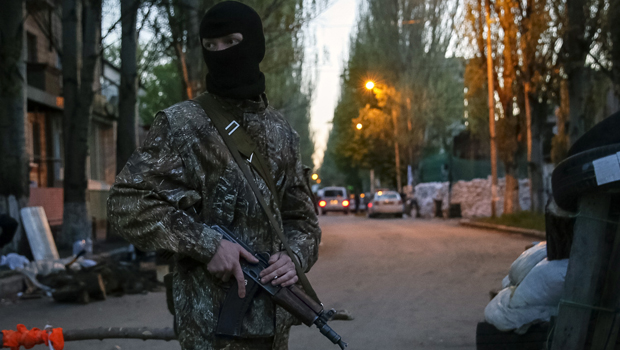 DONETSK, Ukraine - The United States and other nations in the Group of Seven agreed Friday to "move swiftly" to impose additional economic sanctions on Russia in response to its actions in Ukraine.

In a joint statement released Friday night by the White House, the G-7 nations said they will act urgently to intensify "targeted sanctions." The statement said the G-7 will also continue to prepare broader sanctions on key Russian economic sectors if Moscow takes more aggressive action.

The White House said U.S. sanctions could be levied as early as Monday.

The announcement came as top Ukrainians spoke of imminent invasion and Moscow said that pro-Russian separatists would not lay down their arms in eastern Ukraine until activists relinquish control over key sites in Kiev.

The G-7 nations said they were moving forward on the targeted sanctions now because of the urgency of securing plans for Ukraine to hold presidential elections next month.

The penalties are expected to target wealthy Russian individuals who are close to President Vladimir Putin, as well as entities they run. However, the U.S. will continue to hold off on targeting broad swaths of the Russian economy, though the president has said he is willing to take that step if Putin launches a military incursion in eastern Ukraine.

A senior Obama administration official said each country in the G-7 would determine their own sanctions. While the sanctions will be coordinated, they will not necessarily be identical, according to the official, who was not authorized to discuss the matter publicly and insisted on anonymity.

The White House released the G-7 statement hours after Obama convened a conference call with European leaders to gauge their commitment to additional sanctions.

Tensions were heightened on the ground, with Russian fighter jets reported crossing into Ukrainian airspace and a team of unarmed foreign military observers detained by pro-Russian forces in Slovyansk, the heart of the separatist movement in the east.

With last week's Geneva agreement calling on all illegal armed groups to lay down their weapons and hand over occupied cities and facilities in tatters, both sides exchanged threats and warnings Friday.

Accusing the West of plotting to control Ukraine, Russian Foreign Minister Sergey Lavrov declared that pro-Russia insurgents in the country's east would only disarm and leave the territory they have occupied if the Ukrainian government clears out a protest camp in Kiev's Independence Square, known as the Maidan, and evicts activists from other occupied facilities.

"The West wants - and this is how it all began - to seize control of Ukraine because of their own political ambitions, not in the interests of the Ukrainian people," Lavrov said.

Pro-Russia insurgents will disarm and vacate buildings "only if Kiev authorities get down to implementing the Geneva accords, clear out that shameful Maidan and liberate the buildings that have been illegally seized," the Russian foreign minister said.

"The world has not yet forgotten World War II, but Russia is already keen on starting World War III," Ukraine's acting prime minister, Arseniy Yatsenyuk told a meeting of his Cabinet.

"We have the information we are in danger," Lubkivsky told reporters, saying Russian military maneuvers involving air and ground forces along the Ukraine border were a "very dangerous development."

"We are going to protect our motherland against any invasion," Lubkivsky said. "We call on the Russians to stop this madness."

The heightened rhetoric came as U.S. officials reported that Russian fighter jets flew into Ukrainian airspace several times over the last 24 hours, in what one called a provocation.

It wasn't clear what the intent was, but the aircraft could have been testing Ukrainian radar or making a show of force, said the officials, who spoke on condition of anonymity because they were not authorized to talk publicly about the issue.

The flights came as Russia increased military exercises along the Ukraine border, including moving a broad array of fixed wing and rotary aircraft, infantry and armored troops - further inflaming fears of a potential Russian military incursion into Ukraine.

In another worrying development, a group of foreign military observers traveling under the auspices of the Organization of Security and Cooperation in Europe were detained by pro-Russia separatists in Slovyansk.

The German-led team was accused of possessing "suspicious materials," said Stella Khorosheva, a spokeswoman for the town's self-proclaimed separatist mayor. She said they were unharmed and would be released after further investigation.

Germany's Defense Ministry said it had lost contact with the team, which it said was made up of 13 people - five Ukrainians, three German soldiers, a German translator and one soldier each from the Czech Republic, Poland, Sweden and Denmark.

Even before the G-7 announced new sanctions were in the works, ratings agency Standard & Poor's cut Russia's credit rating to near junk, saying tensions over Ukraine were causing investors to pull money out of the country.