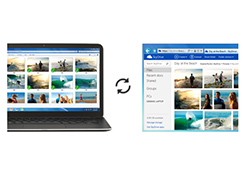 (MoneyWatch) Microsoft's SkyDrive cloud storage solution is something of a paradox: One of the oldest online storage products, it's also the least mature. It offers a large amount of space (25GB for the oldest users, 7GB for more recent adoptees), yet it's been the most difficult to use. Actually, it's not very mysterious; I've just described the quintessential Microsoft product -- powerful, yet rough around the edges and often neglected for long stretches of time.

In recent months, Microsoft has finally turned its attention to modernizing SkyDrive. You can now install a desktop app that, like Dropbox, lets you access SkyDrive's online storage as if it were a folder on your PC. It's also tightly integrated into Windows 8 and the newest version of Microsoft Office. And this week, we have something new: The ability to selectively sync folders.

Suppose you have a dozen folders in your SkyDrive location -- some personal, some business. In the past, any computers which you chose to sync with SkyDrive got all of those folders, like it or not. Now you can specify which folders get copied and kept in sync on a PC-by-PC basis. That's a dramatic step forward for users who mix work and personal folders online.

To use the new feature, be sure you upgrade to the newest version of SkyDrive, which you can get from the SkyDrive home page. At any time, right click the SkyDrive icon in the Notification area of the taskbar and choose Settings. In the Choose folders tab, click Choose folders and pick the ones you want to keep in sync (and those which you don't).

This is great, but don't confuse the feature with Cubby's even better trick. Using Cubby, you can right-click any folder on your PC and turn it into a "cubby," which means it'll sync with the cloud. That lets you sync arbitrary folders from anywhere on your PC with your cloud storage. Hopefully Microsoft is listening, because that would be a great feature to take advantage of that beefy 25GB of storage.