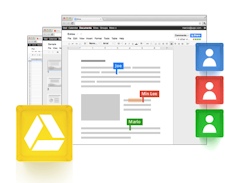 (MoneyWatch) If you're interested in moving your files online, then this is a week for you: The cloud storage news just keeps coming. Yesterday, I told you about Microsoft's new SkyDriverollout, which was strategically timed to launch ahead of Google Drive. Now that we can compare these two heavyweights, it's time to see how they stack up.

Google Drive is Google's long-awaited, long-rumored cloud storage solution. You can think of it as an extension of Google Docs, with the ability to store any sort of files online, but view and edit documents using Google Docs -- with version control so you can always roll back to previous versions for up to 30 days.

The new service also works cross-platform, with apps for Windows, Mac, Android, and iOS (though the iPhone app hasn't arrived yet -- look for it in iTunes soon). Indeed, Google Drive isn't quite fully baked, and the launch was a bit scattershot. Not only is there no iOS app, but many users visiting Google Drive were greeted with a message telling them to come back soon; their Drive isn't ready yet.

That said, it's an exciting time to be using cloud storage services. Google Drive has injected a healthy dose of competition into the space which, together with SkyDrive, is going to shake up the space. Here's a quick comparison of the top three competitors:

Dave Johnson was employed by Microsoft Corporation at the time this article was written.

The 10 best and worst states for entrepreneurs

Think for yourself: The danger of blind obedience