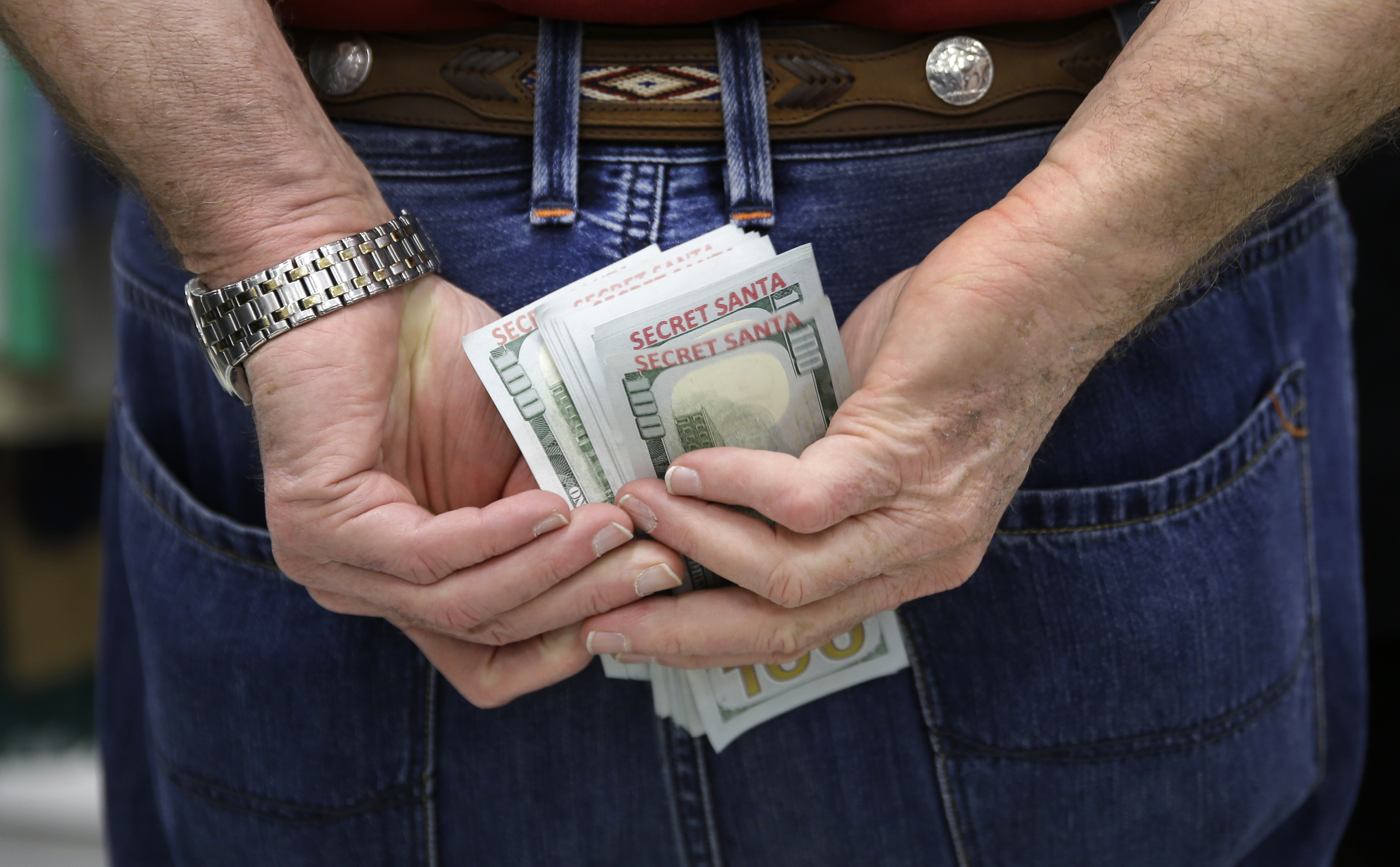 "I thought I was going to jail," she said.

Instead, Lewis, 24, and Kimoni Griffin, 23, received several $100 bills from a secret Santa who chose Ferguson for the Wednesday afternoon holiday cash giveaway to help the community recover after the August 2014 fatal shooting of Brown, who was black, by former Ferguson police officer Darren Wilson, who is white.

The anonymous benefactor, a Kansas City businessman, asked to not be publicly identified to focus attention on the importance of charity rather than his own background.

"Our mission is to do random acts of kindness," he said. "Kindness is the bridge between all people. And right now, Ferguson needs that kindness."

The donor follows in the footsteps of his late friend Larry Stewart, who over a quarter-century disbursed an estimated $1.3 million to the needy in Kansas City and other communities. Stewart publicly identified himself shortly before his 2007 death from esophageal cancer at age 58.

The donor and a dozen police "elves" from the Missouri Highway Patrol, FBI and Ferguson Police Department visited two thrift shops and a pair of elementary schools, including the former fourth-grade classroom of 9-year-old Jamyla Bolden, who was killed in August when shots were fired into her home as she did homework on her mother's bed.

The students received $20 bills along with a secret Santa coloring book that tells the story of Stewart, who before earning millions in the cable television and long-distance telephone service industries received his own unexpected donation at a Mississippi diner where he couldn't afford to buy his meal.

Instead of shouts, curses, raised fists and projectiles, state Trooper Justin Lacy and the other officers were greeted with hugs, tears of joy and smiles of disbelief. One recipient asked to see an ID card, convinced the gift of free money was a prank. The school children implored Lacy and his colleagues for their autographs.

"People get to see another side of what police officers do. We're a part of the community as well," he said.

The secret Santa said he typically hands out between $100,000 and $120,000 annually with the help of other anonymous counterparts in cities such as Charlotte, North Carolina and Detroit. On Monday, he plans to visit Phoenix, Arizona.

Sonny Dayan, whose West Florissant Avenue cellphone store was damaged by looters after Brown's death and again after a grand jury declined to indict Wilson, said the surprise acts of charity showed someone cared.

Last year, CBS News' Steve Hartman witnessed the Secret Santa in action.The Secret Santa had deputized local deputies to give away much of the money for him.

Jessica Rodriguez, a mother of three, was pulled over. While the deputy walked to her car, Rodriguez talked to someone on her cell phone to tell them she'd been pulled over for "no cause."

"How you doing, m'am?" the deputy asked her.

"I'm good until you pulled me over," she answered.

"Okay, well, on behalf of Secret Santa, he wants you to have this, OK?" the deputy said as he handed her money.

Rodriguez told the deputy he saved her Christmas.

"I wasn't going to be able to get my kids anything," she told him.

"Well, I hope you may be able to get your kids something with it," he said.