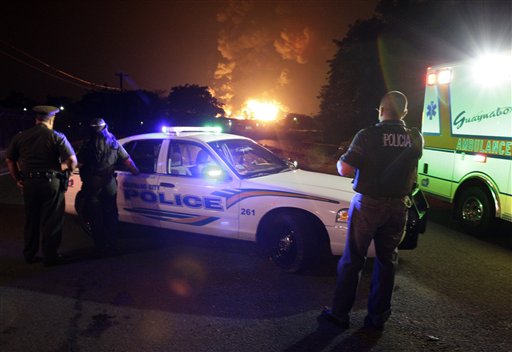 Secret police burst into a restaurant and seized an organizer of a general strike that crippled Venezuela's economy. Opposition leaders threatened Thursday to call another strike in protest.

Agents fired into the air when patrons at the restaurant tried to keep them from taking away Carlos Fernandez, president of the country's largest business federation, Fedecamaras, in the midnight raid Wednesday, his bodyguard said.

Ortega condemned the arrest as "a terrorist act" that presaged a wave of repression against Venezuela's opposition, already shaken by the slayings and possible torture of three dissident Venezuelan soldiers and an opposition activist.

The two-month strike, called Dec. 2 to seek Chavez's ouster or early elections, devastated the economy. It ended this month in all but Venezuela's oil sector.

Chavez accused strike leaders of trying to topple his government.

Fedecamaras vice president Albis Munoz said Fernandez was seized without a court order and was being held by secret police. She warned that Fedecamaras might call another nationwide strike.

"Definitely there will be actions, and very strong actions," Munoz said, adding that Fernandez was "practically kidnapped."

"I insist in the word 'kidnapped' because … we know absolutely nothing about where they have our president. There has been no way of communicating with him," she said.

Fernandez was abducted about midnight Wednesday by eight gunmen as he was leaving a restaurant in Caracas' trendy Las Mercedes district, said bodyguard Juan Carlos Fernandez. The gunmen fired shots into the air when customers tried to intervene, the bodyguard told Globovision TV.

Opposition leaders called for street protests and appealed to the Organization of American States, the United Nations and former President Carter's organization, the Carter Center, which have brokered talks here.

Fernandez's abduction made a mockery of a "peace pact" renouncing violence that was signed by government and opposition negotiators on Wednesday, said an angry opposition delegate, Rafael Alfonzo.

"This government doesn't want to negotiate. It only wants conflict. We won't back down," Alfonzo said.

International human rights groups demanded an investigation into the slayings of three dissident military officers and an opposition activist.

All four bodies were found in the suburbs of Caracas with their hands tied, gagged with tape.

According to the New York-based Human Rights Watch, a witness to the abductions saw the victims being forced into two vehicles by men wearing ski masks, not far from a plaza that has become the central rallying point of the opposition. Yepez said the abduction took place Saturday night.

"The circumstances strongly suggest that these were political killings," said Jose Miguel Vivanco, executive director of the Americas Division of Human Rights Watch. "The government must launch a prompt and impartial investigation into this vicious crime, and must guarantee the safety of the reported witness to the killings."

Yepez said police had "practically ruled out" political motives. There have been no arrests.

According to Human Rights Watch, seven people have been killed in street protests since last December. But these are the first reports of possible extrajudicial executions.

Chavez was elected in 1998 and re-elected in 2000. He promised to wipe out the corruption of previous governments and redistribute the country's vast oil wealth to the poor majority.

His critics charge he has mismanaged the economy, tried to grab authoritarian powers and split the country along class lines.

Opponents said Wednesday that more than 4.4 million Venezuelans had petitioned for a constitutional amendment to cut Chavez's term in power from six to four years.

Organizers said they had counted and verified 3.7 million signatures collected in a nationwide petition drive on Feb. 2. These were added to another 719,000 signatures supporting the initiative already gathered.

Under the constitution, organizers need signatures from 15 percent, or about 1.8 million, of the country's 12 million registered voters, to force a referendum on the amendment. This would then clear the way for general elections later this year.