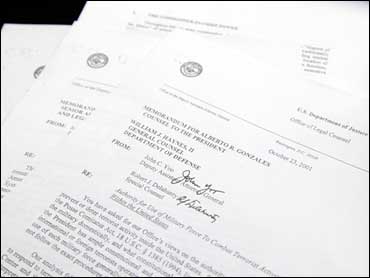 The Obama administration threw open the curtain on years of Bush-era secrets Monday, revealing anti-terror memos that claimed exceptional search-and-seizure powers and divulging that the CIA destroyed nearly 100 videotapes of interrogations and other treatment of terror suspects.

An October 2001 memo by the Justice Department's John Yoo authorized the use of the U.S. military within the United States in combating terrorists. Yoo defined the 9/11 attacks as "war" and therefore concluded the President could employ the military domestically in a "military action" rather than a police action. Under Posse Comitatus Act, the American armed forces are forbidden from operating domestically, CBS News reports.

A March 2003 memo gave the President broad powers to transfer captured al Qaeda and Taliban prisoners to third countries. It also stipulated that the torture provisions of the Geneva Convention did not apply, because these prisoners were "non state" enemy combatants and therefore not entitled to Geneva protections. The memo also made it clear the U.S. should not agree to knowingly send prisoners to countries where they may be tortured, but essentially said the U.S. could not be liable for torture if it happened after the transfer, CBS News reports.

The Bush administration eventually abandoned many of the legal conclusions, but the documents themselves had been closely held. By releasing them, President Barack Obama continued a house-cleaning of the previous administration's most contentious policies.

"Too often over the past decade, the fight against terrorism has been viewed as a zero-sum battle with our civil liberties," Attorney General Eric Holder said in a speech a few hours before the documents were released. "Not only is that school of thought misguided, I fear that in actuality it does more harm than good."

The Obama administration also acknowledged in court documents Monday that the CIA destroyed 92 videos involving terror suspects, including interrogations - far more than had been known. Congressional Democrats and other critics have charged that some of the harsh interrogation techniques amounted to torture, a contention President George W. Bush and other Bush officials rejected.

The new administration pledged on Monday to begin turning over documents related to the videos to a federal judge and to make as much information public as possible.

The legal memos written by the Bush administration's Office of Legal Counsel show a government grappling with how to wage war on terrorism in a fast-changing world. The conclusion, reiterated in page after page of documents, was that the president had broad authority to set aside constitutional rights.

Fourth Amendment protections against unwarranted search and seizure, for instance, did not apply in the United States as long as the president was combatting terrorism, the Justice Department said in an Oct. 23, 2001, memo.

On Sept. 25, 2001, Yoo discussed possible changes to the laws governing wiretaps for intelligence gathering. In that memo, he said the government's interest in keeping the nation safe following the terrorist attacks might justify warrantless searches.

That memo did not specifically attempt to justify the government's warrantless wiretapping program, but it provided part of the foundation.

Yoo, now a professor at the University of California at Berkeley School of Law, did not return messages seeking comment. Former Attorney General Alberto Gonzales, who served as White House counsel when many of the memos were written, did not immediately respond to a request for comment made through his attorney.

The memos reflected a belief within the Bush administration that the president had broad powers that could not be checked by Congress or the courts. That stance, in one form or another, became the foundation for many policies: holding detainees at Guantanamo Bay, eavesdropping on U.S. citizens without warrants, using tough new CIA interrogation tactics and locking U.S. citizens in military brigs without charges.

Obama has pledged to close the Guantanamo Bay prison within a year. He halted the CIA's intensive interrogation program. And last week, prosecutors moved the terrorism case against U.S. resident Ali Al-Marri, a suspected al Qaeda sleeper agent held in a military brig, to a civilian courthouse.

A criminal prosecutor is wrapping up an investigation of the destruction of the tapes of interrogations.

Monday's acknowledgment of videotape destruction, however, involved a civil lawsuit filed in New York by the American Civil Liberties Union.

It is not clear what exactly was on the recordings. The government's letter cites interrogation videos, but the lawsuit against the Defense Department also seeks records related to treatment of detainees, any deaths of detainees and the CIA's sending of suspects overseas, known as "extraordinary rendition."

At the White House, press secretary Robert Gibbs told reporters he hadn't spoken to the president about the report, but he called the news about the videotapes "sad" and said Obama was committed to ending torture while also protecting American values.

ACLU attorney Amrit Singh said the CIA should be held in contempt of court for holding back the information for so long.

"The large number of videotapes destroyed confirms that the agency engaged in a systematic attempt to hide evidence of its illegal interrogations and to evade the court's order," Singh said.

CIA spokesman George Little said the agency "has certainly cooperated with the Department of Justice investigation. If anyone thinks it's agency policy to impede the enforcement of American law, they simply don't know the facts."

The details of interrogations of terror suspects, and the existence of tapes documenting those sessions, have become the subject of long fights in a number of different court cases. In the trial of Sept. 11 conspirator Zacarias Moussaoui, prosecutors initially claimed no such recordings existed, then acknowledged after the trial was over that two videotapes and one audiotape had been made.

The Dassin letter, dated March 2 to Judge Alvin Hellerstein, says the CIA is now gathering more details for the lawsuit, including a list of the destroyed records, any secondary accounts that describe the destroyed contents and the identities of those who may have viewed or possessed the recordings before they were destroyed.

But the lawyers also note that some of that information may be classified, such as the names of CIA personnel who viewed the tapes.

The separate criminal investigation includes interrogations of al Qaeda lieutenant Abu Zubaydah and another top al Qaeda leader. Tapes of those interrogations were destroyed, in part, the Bush administration said, to protect the identities of the government questioners at a time the Justice Department was debating whether or not the tactics used during the interrogations were legal.

Former CIA director Michael Hayden acknowledged that waterboarding - simulated drowning - was used on three suspects, including the two whose interrogations were recorded.

John Durham, a senior career prosecutor in Connecticut, is leading the criminal investigation, out of Virginia, and had asked that he be given until the end of February to wrap up his work before requests for information in the civil lawsuit were dealt with.