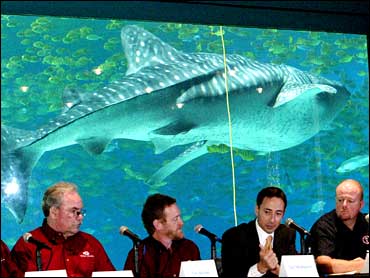 Another whale shark died Wednesday at the Georgia Aquarium, the second this year at the only facility outside Asia to display the huge, rare fish.

Aquarium officials said identifying the cause of "Norton's" death could take months. A necropsy was planned.

Just two weeks ago, two young male sharks arrived from Taiwan, and fishery officials there said at that time they were satisfied the Atlanta aquarium provided quality care.

In January, Ralph, a whale shark who was one of the aquarium's first stars when it opened in 2005, died from peritonitis, an infection in his abdomen.

Aquarium officials said Wednesday that Norton had stopped eating in recent months and swam erratically. Early Wednesday, he settled to the bottom of the aquarium's centerpiece Ocean Voyager tank.

Ray Davis, Senior Vice President, Zoological Operations at the aquarium, told CBS News Correspondent Mark Strassmann, "As with autopsies of humans, it can take weeks or months to get results back and start getting definitive ideas of what's going on."

Norton was euthanized after his health didn't improve. His death will be investigated for any possible link to Ralph's death, aquarium officials said.

Ralph had stomach problems that inflamed a membrane in his abdomen, but the aquarium has also said a chemical used in cleaning the sharks' tank may have contributed to Ralph's loss of appetite. The tank-cleaning routine since has been changed.

Adding to the controversy is the death of Gaspar, a Beluga whale that also died at the aquarium in January. Gaspar, who was rescued from a Mexican amusement park (and was 300 pounds underweight at the time), died of a bone infection.

The deaths of these sharks has the critics circling, reports Strassmann. Much of the criticism is philosophical — whether creatures so enormous, and whale sharks can grow to 40 feet — can ever be kept healthy in captivity.

"There's sadness over the death of a magnificent animal," Lori Marino, Behavioral Biologist from Emory University told CBS. "And then anger because that animal should not have been there in the first place."

Many visitors Wednesday had just learned of Norton's death, including Christine Obijeski, who brought her 3-year-old daughter, Kristen, and her 4-year-old nephew, Richard Poelvoorde.

"I told them Norton had died, and they asked me why," Obijeski said. "They said he might have been sad because Ralph wasn't here."

The new arrivals, Yushan and Taroko, and female whale sharks Alice and Trixie share a 6 million-gallon tank. The aquarium says the tank is big enough for them.