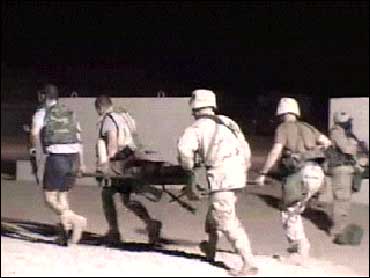 A second U.S. serviceman has died from wounds he suffered in a grenade attack on soldiers in Kuwait, an attack an Army sergeant is suspected of carrying out.

Sgt. Hasan Akbar is in custody. He was shipped to a military jail in Germany on Tuesday after a judge found probable cause to try him for the assault. The probable cause ruling keeps Akbar confined as military investigators continue to investigate.

Akbar, an American Muslim who told family members he was wary of going to war in Iraq, has not been charged.

The Army said Akbar was taken from Camp Doha, Kuwait, to the Mannheim Confinement Facility, where he will await a pretrial investigation. It was not clear where that would take place.

"It appears that the explosions were the result of three grenades that were thrown or rolled through the front door of each of these three tents," said a statement from Fort Campbell, Ky., home of the 101st.

CBS News Correspondent Mark Strassman, traveling with the 101st, was a few tents away when the blast occurred.

A search was quickly begun and before long, it had focused on a single soldier, a sergeant engineer living in the camp. He was found, injured, hiding in a bunker.

"When this all happened we tried to get accountability for everybody," Col. Frederick B. Hodges, commander of the division's 1st Brigade told Britain's Sky News. "We noticed four hand grenades were missing and that this sergeant was unaccounted for."

Army investigators will complete a report and send it to Akbar's superiors, said Marc Raimondi, a spokesman for the Army's Criminal Investigation Division in Virginia.

Before the latest death, military experts said Akbar could face one charge of intentional murder and additional charges of attempted murder for the wounded soldiers.

Eugene Fidell, a Washington lawyer and founder of the National Institute of Military Justice, said the crime could warrant the death penalty, which is rare in the military.

There are six people on the military's death row, but there have been no military executions since 1961.

Stone graduated from Benson High School in Portland, Ore., and Oregon State University. He enlisted in 1983, went through the ROTC program at Oregon State and was commissioned in 1988.

"He was wonderful, the best son anybody could ask for," said his stepmother, Sally Stone of Riggins, Idaho. Stone's mother, Betty Lenzi of Ontario, Ore., said she was too upset to talk.

The slain man's father, Richard Stone of Riggins, Idaho, told television station KIVI that his last contact with his son was through an e-mail Saturday. In it, Stone said things were going well and that he was a little nervous but ready for the mission.