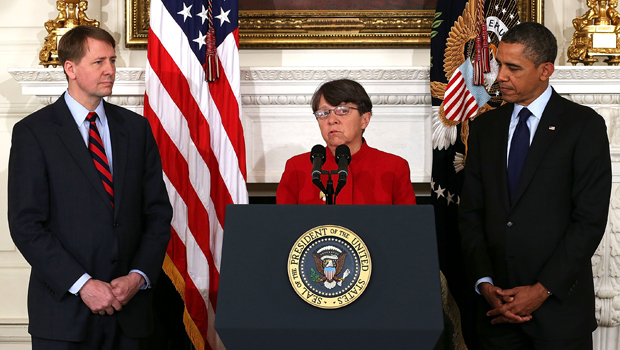 NEW YORK Mary Jo White, President Barack Obama's nominee to lead the Securities and Exchange Commission, has represented an A-list of banks and corporations that could raise conflict-of-interest questions during her confirmation hearing.

White's financial disclosure form was made public Friday and includes a list of clients from her years as a corporate litigator. Among them are several Fortune 100 companies - JPMorgan Chase (JPM), General Electric (GE), Microsoft (MSFT), Hess (HES) and Verizon (VZ) - Switzerland's largest bank and the world's biggest automaker, Toyota (TM).

White says she will remove herself from any decision affecting a former client for one year after she represented them.

The Senate must confirm White before she can take office. While her former clients could draw attention, many of her predecessors also took office with clients that posed conflicts of interest.

White, a former U.S. attorney in Manhattan, would become the first ex-prosecutor to head the SEC in its 79-year history.

Her disclosure form shows assets of between $6 million and $27 million spread between a number of investment and retirement funds. Some of them are jointly held with her husband, John White, who also is a corporate lawyer.

Federal law only requires her to provide a range for her assets.

White also said in a separate letter to the SEC's ethics officer that she would step aside from all decisions before the SEC brought by her husband's firm, Cravath, Swaine & Moore. In addition, her husband will sell his shares in several investment funds.

The SEC chairman and commissioners must vote to approve enforcement actions against companies or individuals. The agency has been criticized in recent years for not bringing charges against top executives of major banks that contributed to the 2008 financial crisis.

White's pledges to recuse herself from decisions affecting former clients or current clients of her husband are in line with federal ethics guidelines for agency officials. In both cases, she said she would step aside unless she gets a specific exemption from the SEC ethics officer.