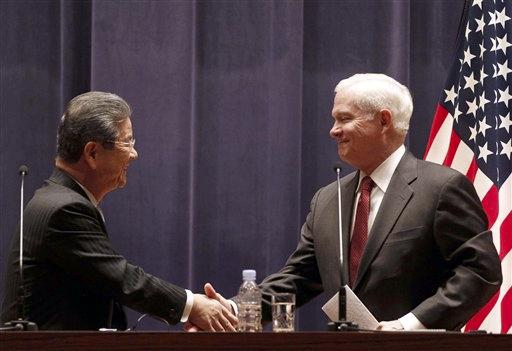 "I'm looking forward to it. I think it'll be interesting," Gates said.

The weapons command center in the Beijing suburb of Qinqhe is a site a few U.S. officials have visited previously, including former U.S. Defense Secretary Donald H. Rumsfeld in 2005, so Gates is unlikely to learn much about China's capabilities that was not already known. Chinese military officials also routinely scrub all traces of truly sensitive materials before allowing Westerners inside such places, as Gates seemed to acknowledge Tuesday.

"I'm not quite sure what I'll see," Gates said with a slight smile.

Still the visit to the base was sought by the United States to balance the 2009 visit of a senior Chinese general to the American equivalent facility, U.S. Strategic Command headquarters in Nebraska.

"I hope I have an equal opportunity," Gates said to reporters traveling with him, but who were barred from the site.

The Chinese base maintains control over nuclear and conventional strategic missile forces, although U.S. analysts have said wartime operations probably would be conducted from another, more secretive site. China has short-, medium-, long-, and intercontinental-range ballistic missiles.

China maintains a nuclear arsenal of about 200 warheads deliverable by land- and submarine-based missiles as well as bomber aircraft, according to the Federation of American Scientists.

Foreign observers have suggested China might abandon its no first-use policy in the event of a major crisis over Taiwan or other crucial concerns, although ranking Chinese military officers and government-backed scholars repeatedly have denied such speculation.

The stop at the base and a quick visit to China's Great Wall were capping a four-day trip for Gates dominated by the effort to repair strained military ties ahead of Chinese President Hu Jintao's state visit to Washington next week.

Gates' visit turned the page on a rocky year in which China pulled out of military talks and withheld an earlier invitation to Gates in protest of a nearly $6.4 billion arms sale to China's rival, Taiwan.

China agreed Monday to more direct military cooperation with the United States but stopped short of the broad give and take the United States says would benefit both nations. Gates said China is taking seriously his proposal to erect a new, more durable framework for military talks. He hopes to convene the first such discussions in the first half of 2011.

The security talks would be a step beyond current contacts largely focused on maritime issues, and would cover nuclear and missile defense issues as well as cyberwarfare and military uses of space.

Hu praised the renewal of lower-level military exchanges with the U.S. during his meeting with Gates on Tuesday. China made sure Gates saw the highest-level officials, and threw lavish banquets and lunches for him.

Gates' long-delayed visit would be "very helpful in promoting mutual understanding and trust and facilitate improvement and development of military-to-military relations between our two countries," Hu said during their meeting at the Great Hall of the People, the seat of parliament in downtown Beijing.

For now, the United States and China will expand the fragile discussions between the two militaries and work more closely in noncombat areas such as counterterrorism and counterpiracy.

Chinese Defense Minister Gen. Liang Guanglie said China wants to avoid "misunderstanding and miscalculation" between the two militaries, a nod toward the open lines of communication sought by the United States as a way to stop either side from blundering into war.

China conducted the first test flight of a radar-evading fighter jet just hours before Gates met with Hu on Tuesday. Gates told reporters afterward that he asked Hu whether the test was timed intentionally to coincide with his visit and that he took Hu "at his word" that it was not.