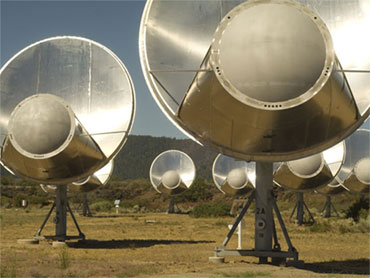 Who hasn't looked up at the night time sky and wondered . . . Is anybody out there? These days, astronomers are doing more than just speculating about intelligent life on other planetsl; they're actively seeking it out. And the scientists leading the hunt seem remarkably confident that one of these days they'll be able to say where, and when. Don Teague reports our Cover Story:

Are we alone? It's a question we humans have been asking ourselves since we first gazed upward to the heavens.

Consider the constellations of the ancient Greeks, the theories of Copernicus, and (of course) the movies of Hollywood.

Still, the serious scientific search for extraterrestrial intelligence is a reasonably young venture. In fact, it only turned 50 just this past week.

It all began in Green Bank, West Virginia in 1960.

A young scientist named Frank Drake turned a giant radio telescope skyward, and listened for signs of life in the universe.

"That was a time when astronomy had become very exciting," he said, "because of the realization that we were going to start exploring space, going to other planets. And, always the prime question in the general public's mind, as well as with scientists was, is there life out there? And in particular, is there intelligent life?"

Drake said he became fascinated with the power of radio astronomy, with stars, of hydrogen in our galaxy, the things astronomers study. "But, always in the back of my mind, was the possibility that we might be able to use our radio telescopes to find intelligent life," he said.

Today, the scientists who work on the search for extraterrestrial intelligence (SETI for short) are STILL listening, and when they aren't, their computers are.

"A good analogy is to say, we've scooped one glass of water out of all of the earth's oceans," said Jill Tarter, inspiration for the Jodie Foster character in the 1997 film "Contact" who discovers evidence of alien intelligence in the form of a radio signal from space. "And we've examined that glass of water looking for fish. Well, we haven't found any fish yet. It's not logical. We haven't yet done enough searching to draw that really important conclusion about whether or not there are any fish in the ocean - or other intelligences in the universe."

The real-life Tartar has been searching for ET for more than two decades now, and has seen the nature of that search change over time.

"Particularly early on there was this, 'What's a nice girl like you doing in a field like this,' right?'" she laughed. "It has become much more mainstream. And when SETI can end up being the rationale for building a new astronomical telescope, it's really joined the mainstream."

Actually it's an ARRAY of radio telescopes, the Allen Telescope Array (named for Paul Allen, the co-founder of Microsoft who funded the project).

When the Allen array is completed, it will have 350 dishes spread over 90 acres of the northern California wilderness, all waiting and listening.

And if you think this is all a costly waste of time, these scientists disagree.

"In fact, when we think about this - and we do take it seriously - we actually do plan for success," said Tarter. "And so if you were to look at the refrigerator that's here at the observatory you'd find a bottle of champagne waiting."

Astronomers like Tartar hope they're closer than ever to discovering that elusive signal, in part because they're finally figuring out where to look.

In 1992, the very first planets outside our solar system were found in the Virgo constellation.

Today, there are more than 400 known planets out there. And many believe we are on the verge of finding many more planets. And on one of those planets, they reason, there's a good chance there could be life.

Which brings us to the Kepler mission. Launched a little more than a year ago, its cargo includes the most sophisticated and sensitive optical telescope ever.

"If Kepler were turn around and point at Earth, it would be able to tell when one person in a small town switches off her porch light at night," said Jon Jenkins, a SETI investigator working on the NASA project.

While the Hubble Space Telescope has dazzled the world with its gorgeous images of everything from nebulae to supernovas, Kepler has just one and only mission: planet hunting.

"And the breakthroughs that Kepler is going to make are going to cause the theorists to spin on their heads, and come up with new theories for how planets form, how planetary systems evolve," said Jenkins. "In fact, we'll ultimately discover, I believe, new kinds of planets that people haven't imagined in terms of what they're made of and where they are."

But will they find LIFE?

And if our popular culture is any gauge, it's a virtual certainty that somewhere there are others like us.

But, unlike the way it works in the movies, the real-life search for aliens is time consuming and - believe it or not - kind-of dull.

"We're doing something incredibly boring," said Jenkins. "We're staring at a very large patch on the sky that has 165,000 stars that we've preselected, and we're going to simply stare at these stars for the next three-and-a-half years, watching for instances when the star winks at us because a planet has crossed in front of its star, blocking out a very small fraction of the light. It's kind of like a total eclipse of the sun, when the moon gets in between us and the sun, except these stars and planets are so far away that all you would be able to see would be a very small dot on the star."

The Kepler mission has only just begun, but already, NASA astronomers have found five NEW planets - making SETI scientists more and more hopeful that the question "Is anyone else out there?" may have an answer soon.

And they're betting that answer is "Yes."

"We will see other civilizations which, almost certainly, will have gotten around the troubles that afflict our ways of life here on Earth, and have shown it can be done," said Drake. "And it will also tell us how closely we are related to one another here on Earth. Because, the creatures we find in space will be so different from us, for sure, that we'll suddenly realize, 'Boy, we humans are a special lot.'"

"I do look at the sky at night, and it's an amazing sight," said Tarter. "It never stops satisfying. It never stops exciting you to look up and to think about the fact that, 'Gee, those are other people's suns. And maybe on some planet up there, someone else is looking in this direction asking the same kinds of questions we are, but just from the other side.'"

For more info:
The SETI Institute