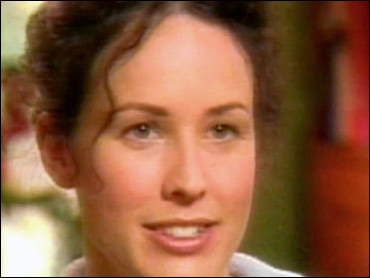 As a Hollywood screenwriter, model and actress, Angela Shelton lives much of her life on film.

But for years, this cover girl has covered a dark secret – an unexposed snapshot of her past.

"It was a door that you shut. And just zip it and don't talk about it again," says Angela, who always knew that she would have to face her painful past one day. She just didn't know how.

Then in 2001, she had an idea. In a quest to find herself, as Correspondent Bill Lagattuta reported last spring, she would make a very unusual documentary.

Angela's idea was to hit the road in a rented RV, and try to meet as many women as she could who were also named Angela Shelton.

Why? She had a hunch that many of those women would share something else besides just a name – something much more personal.

What did she think she was going to find? "In the back of my mind, I thought I was gonna find that the statistics aren't really right, and that there are more women than you really think are being abused," says Angela. "But I didn't really want to find that!"

Angela knew about the subject of sexual abuse well, because that was her dark secret. As a child, she says, her father molested her.

"I lied for my dad the whole time. I've been making excuses for him since I was 8 years old," says Angela. "I'm on a mission. I'm on a crusade and I cannot stop, because a lot of people said, 'You're an actress, you're in Hollywood. You're gonna reveal that you were molested as a child? Are you crazy? There goes your career.' But, honestly, I don't care."

As Angela's social experiment rolled across the country, her camera rolled, too. She said she contacted 76 women with the name Angela Shelton, and she says they drove 14,000 miles in 57 days: "I left messages for 55 of them. I spoke to 32, and out of the 32, I think it was 17 that we met."

When 48 Hours met Angela, she was in the middle of editing her film. As we retraced some of her steps, and we met many of the Angelas that she did, it became clear that her theory was remarkably dead on.

But Angela feared her journey would take her down a terrifying road. "I just didn't have any idea that I was gonna have to literally unzip myself and reveal everything," she says. "It's hard for me to compute that my father has done all these things."

Long before she had the idea for her film, Angela's life was a drama. Her father left her mother, JoAnn, and married her mom's best friend when Angela was just 3.

"My mom actually asked me, at 3, who I wanted to live with. And I chose my dad because my stepmother made KoolAid. I was 3 years old," recalls Angela.

Her stepbrother, Stephen, remembers how happy Angela was when she first moved in: "Goofy and wonderful. She was just the greatest kid."

But he says her innocence would soon be lost when her father began taking the family to nudist colonies: "We were the creepy people. We were the ones that when we showed up, everybody else wanted to leave."

Life at home was truly bizarre. Angela's father, stepmother and the kids were often all naked around the house. But then, it got worse.

Angela says the details of what happened in that house are hard to hear. But she insists that stories like hers have to be told.

"He would lay out on this table, and me and my sister would have to use lotion, and he would show us how to do it and move our hands up and down," recalls Angela. "And I shouldn't know how to do that to my father, you know?"

"We didn't know it was bad," says Angela's stepsister, Lisa, who was 5 when this happened, and too traumatized to show her face on camera. "It was, like, a game."

"My dad would be naked on the waterbed and my stepmother would open the door and have her daughter go in there with my dad," adds Angela, who says her father used physical objects like crayons to abuse Lisa. "Pretty much anything he could do, other than actual intercourse."

She says that when her father and stepmother had intercourse, they often made the kids watch: "He said that it was all sexual education in the home…that he was teaching us."

However, Angela says her father wanted their "sex education" kept secret – and he made sure they knew it.

"Aside from being molested, he also beat the blank out of us. You know, we were bare butt, belts, the whole nine yards," says Angela.

For five years, the abuse went on, and so did the silence – until one day, in 1981, Stephen told his real father the horrible truth about what his stepfather was doing: "Dad called Social Services immediately, and they picked me and my sister up from school. They did not waste a minute. I never went home again."

There was a custody hearing in which Angela, Lisa and Stephen all reluctantly told similar stories detailing their sexual abuse.

Angela's mother, JoAnn, says she was shocked: "What I thought I was sending her into was a perfect American home with a family … I was devastated, I was dumbfounded, I was horrified."

The court granted custody of Angela to her mom, and Lisa and Stephen went to live with their biological father. But Angela's father was never criminally charged with anything.

"If we decided to take it all to court, we needed to think about if we wanted that much publicity for all the children," says JoAnn.

"So they decided not to put us through that," adds Angela. "So they did not press charges."

Without the children as witnesses, the state declined to prosecute. But the judge ordered Angela's father and stepmother into counseling and banned them from any contact with the kids.

As the years went by, Angela's mom says she thought her daughter had moved past the abuse: "Angela was gifted. She made honor student. She quit school, took her GED and went into modeling."

But the wounds from Angela's past had never fully healed. "I was self-mutilating when I was modeling," recalls Angela. "I would scratch myself down my face until I bled. I was suicidal. I'd actually attempted it once."

Years later, Angela wrote the screenplay for a movie based on the ups and downs of life with her mother. It was called "Tumbleweeds," and it was about a girl growing up way too fast.

But in her rush to maturity, Angela never dealt with her father. And she was 26 when she finally wrote him a letter. She says she never got a response, but she knew that one day, she would have to confront him face-to-face.

"Abuse like this affects you forever. I was really close to my dad. I'm daddy's little girl," says Angela. "But yet my dad is a child molester. So it's like…it's a very twisted thing."

Angela was still struggling with her past when she set out to search for women who shared her name in the United States.

"I set out and what I said to every Angela was, 'I want to know who you are, where you've been and where you're going,'" recalls Angela.

The 17 Angelas she actually visited came from all walks of life. "Almost straight down the middle," says Angela. "Half are white, half are African American … and the last one is Muslim."

Angela says her worst fears were confirmed when she discovered how many of these women had been abused: "They're, like, 'Oh well, I was raped. I was almost raped. I've been beaten."

In fact, 50 percent of the Angela Sheltons tracked down by Angela had been abused in some way. And because these Angela Sheltons also shared feelings of guilt and shame, they, too, had learned long ago to keep quiet about it.

"I've been raped at gunpoint, and it was a guy that I was dating. And I never told anybody because I thought it was my fault," says Angela Shelton, a school public safety officer in Detroit, who was just a high school girl when she was raped.

That Angela, who now has a family of her own, says she tried to forget about the assault, until the day her alter ego drove into her life.

"It felt good to be able to talk about it and not feel ashamed, and not feel like I did something wrong and like I felt what had happened," says Angela from Detroit.

"You never know what you do when you speak up. And I think that's what Angela did. And that's what she allowed us to do. So the most important thing is talk about it."

Angela also met up with Angela Shelton in Virginia. "Virginia is just precious to me," says Angela. "She to me is that you really can live through anything."

"I feel she's a very warmhearted person, that's easy to talk to. I felt like we really connected," says Angela Shelton, a neonatal nurse in Virginia. Her boyfriend beat her for seven years – and for another three years after she married him.

She finally got away, but she was still reeling from the marriage and the divorce: "I knew this wasn't good for me, but I didn't know how to get out of it because this was a person that I loved."

But she says that Angela helped her let go of the past: "All of a sudden it was, like, 'Hey, you know? That's the way it was. It's not that way now. It's not gonna be that way ever again. And I'm OK.'"

Texas man fights to save son, convicted of deadly attack on family, from execution

Sex, Lies And The Doctor's Wife
Thanks for reading CBS NEWS.
Create your free account or log in
for more features.
View CBS News In
CBS News App Open
Chrome Safari Continue
Be the first to know
Get browser notifications for breaking news, live events, and exclusive reporting.