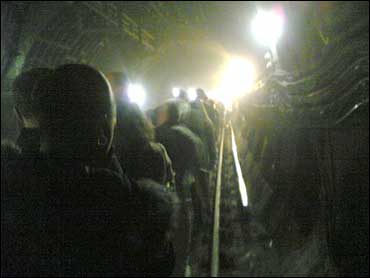 attack (video)
on London since World War II, killing at least 37 people and injuring 700. Britain's foreign secretary said it had the "hallmarks of al Qaeda."

Tony Blair (video)
blamed Islamic terrorists, saying those behind the "barbaric" attacks had acted "in the name of Islam" but that he knew most Muslims worldwide "deplore this act of terrorism."

"They are trying to use the slaughter of innocent people to cow us," Blair said after returning briefly to London from the G-8 summit in Scotland. "They should know they will not succeed."

Foreign Secretary Jack Straw, still at Gleneagles, said, "It has the hallmarks of an al Qaeda related attack. ... There is an assumption, obviously, that this is an al Qaeda based organization. It has the hallmarks of an al Qaeda-based organization and also its ruthlessness." Police said there had been no warning and that the train blasts went off within 18 minutes, starting at 8:51 a.m. (3:51 a.m. EDT). The bus blast happened at 9:47 a.m. (4:47 a.m. EDT), they said.

CBS News Correspondent Jim Stewart reports British investigators were pouring over surveillance camera tape looking for clues, if not the outright faces of the terrorists who pulled off Thursday's attack. There are tens of thousands of surveillance cameras on London streets — 6,000 alone in the London subways.

"Clearly, we've had considerable success in the past using closed circuit television footage in order to trace the movements of the people involved," Deputy Assistant Commissioner Brian Paddick tells CBS News. "That will be one of our first priorities."

Early in the day, investigators believed the bomb that went off aboard the double-decker bus was the work of a suicide bomber, Stewart reports. But by late afternoon, they appeared to be leaning against that notion.

Stewart reports investigators now suspect all the bombers used what they called the "step-on, step-off" delivery system of dropping off a bag and quickly leaving.

Stewart added that British police thought they had a quick break in the case with the discovery of what looked like an unexploded terrorist bomb, but it turned out to be something else.

Investigators were also gathering remnants of the bombs hoping, as police did in Madrid and Bali, to discover key elements of the devices which might lead them to suspects. In Madrid, for example, the cell phones used as remote detonators, were purchased on the black market.

In London, police said they could confirm at least 37 people had been killed, including two in the bus attack. Three U.S. law enforcement officials told The Associated Press at least 40 were killed. French Interior Minister Nicolas Sarkozy later said the death toll had risen to 50, citing a conversation with his British counterpart, but that could not immediately be confirmed.

Police said at least 700 were wounded, many of whom emerged bleeding and dazed from the Underground. Among them, at least 45 were in serious or critical condition, including amputations, fractures and burns, hospital officials told The Associated Press. Two young women from Knoxville, Tenn., were among those treated for injuries in the Underground, said their father, Dudley Benton.

As Wednesday's jubilation at winning the Olympics gave way to the terrible shock of Thursday's attacks, a shaken Blair rushed back to the capital. He then delivered an almost Churchillian appeal for unity, saying in a televised address that it was "a very sad day for the British people, but we will hold true to the British way of life." He praised the "stoicism and resilience of the British people."

Blair arrived back in Gleneagles in Scotland late on Thursday after returning to London for crisis talks following the attacks.

The first blast caught a subway train between Moorgate and Liverpool Street stations, on the eastern fringe of London's financial district. Seven died, police said. Moorgate is named for one of the gates in the city walls of London, of which few traces remain. Some people caught in the blast emerged from the Aldgate Station, near Jack the Ripper's old haunts in Whitechapel.

The second bombing came five minutes later, on a second train deep underground between the King's Cross and Russell Square stations. Police said 21 died. King's Cross station, in one of the seediest parts of London, is the film setting for Platform 9@3/4 in the Harry Potter films. Russell Square station serves Bloomsbury, the early 20th-century literary hotbed where Virginia Woolf and luminaries lived.

At 9:17 a.m., there was an explosion involving two or perhaps three trains around Edgware Road station. Seven people were killed, police said. Edgware Road is the heart of a thriving Arab community, and convenient to Hyde Park, scene of last weekend's Live 8 concert.

The bus explosion, which killed at least two people, took place near Russell Square, an area of many modestly priced hotels popular with tourists. Also nearby is the home where Charles Dickens lived from 1837 to 1839.

"I was on the bus in front and heard an incredible bang, I turned round and half the double decker bus was in the air," Belinda Seabrook told the Press Association news agency. She said the bus was packed with people.

"It was a massive explosion and there were papers and half a bus flying through the air," she said.

Police said they had received no claim of responsibility. An Arabic-language news Web site said a group calling itself "Secret Organization — al Qaeda in Europe" had posted a claim on an Islamic Web site.

"The attack has all the trademarks of the al Qaeda network," said security expert Paul Wilkinson of St. Andrews University in Scotland.

In Washington, a senior counterterrorism official said the claim is considered "potentially very credible" because it appeared on a Web site that in the past has been used for extremist postings, the message appeared soon after the attacks and doesn't appeared hurried or rushed.

The whole of Europe was in a state of alert Thursday. Transportation systems in major U.S. cities also were ordered to be vigilant.

The U.S. raised the terror alert level to orange – or "high" – for trains and other mass transit system, but not airlines. Homeland Defense Secretary Michael Chertoff said there was "no specific, credible information" suggesting an attack in the U.S. was imminent.

"I want to say one thing: This was not a terrorist attack against the mighty or the powerful, it is not aimed at presidents or prime ministers, it was aimed at ordinary working-class Londoners," he told reporters.

In Scotland, the leaders of the G-8 countries – the United States, Britain, Canada, France, Germany, Italy, Japan and Russia – planned to proceed with discussions on the issues of global warming and African poverty that Blair has made the centerpiece of the gathering.

"All of our countries have suffered from the impact of terrorism," Blair said in a statement on the leaders' behalf. "Those responsible have no respect for human life."