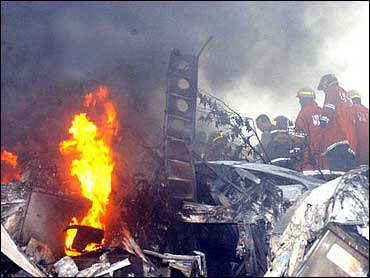 Hundreds of rescue workers resumed the search Tuesday for survivors of a Chinese airliner that plowed into a mist-shrouded mountain in southern Korea. At least 119 people were confirmed dead, but somehow 38 of those aboard survived the fiery crash and six were still missing.

The Boeing 767 shattered and caught fire upon impact, leaving a trail of fallen trees 30 yards wide and 100 yards long. The survivors were pulled from the wreckage, but many were in serious or critical condition. Most of the dead were Koreans.

Battling driving rains and gusting winds Tuesday, rescuers fanned out from the crash site in the hope of finding others who might have been thrown to safety.

"We've concluded that there are no more survivors or bodies in the mangled wreckage. So, we're expanding the search for those who may have been thrown far away upon the impact of the crash," said Shin Mi-ja, an official at the Home Ministry.

The wreckage looked like shredded pieces of paper. The plane's broken tail and nose came to rest near the top of the mountain, where a lack of access roads slowed rescuers' efforts to reach the scene of the disaster.

Fifty-five Chinese air safety officials and investigators flew in late Monday. They will be joined later by South Korean and U.S. officials in a joint investigation of the first fatal accident involving Air China since its establishment in 1988.

"We believe this is a classic case of CFIT (controlled flight into terrain)," said Ham Dae-young, a South Korean government air traffic director, on Monday. "We must note that 95 percent of CFIT cases are due to pilot error."

The pilot — Wu Xing Lu — survived but was in serious condition with head injuries, police said. South Korean officials expect him to provide a clear explanation about the cause of the crash.

Survivors said the plane went down shortly after an in-flight announcement advising passengers to buckle their seat belts to prepare for landing five minutes later.

"The plane suddenly dipped, then rose and then went down again. Seconds later, there was a big bang and I was knocked unconscious," said Jin Wenxue, a 35-year-old Korean-Chinese man from China's Jilin province.

The plane hit one side of the mountain and then plowed toward the peak, catching fire and cutting a trail of fallen trees 100 yards long and 30 yards wide.

"Bodies were burning in the mud. Survivors were crying in pain," said Bae Han-sol, 15, who rushed to the site after the plane skimmed over his village with a roar.

"We seldom see planes flying over our village, so I thought it was strange that the plane, trembling, flew toward the mountain in fog," Bae said.

Dozens of people were rescued alive, but several died in hospitals. Most of the passengers were South Koreans.

Aviation officials said many of the survivors were in the front part of the aircraft, indicating the jet's tail and fuselage hit the ground first. They also said the plane slowed as it skidded through the trees.

Officials said that the control tower at Busan's Kimhae Airport gave the airliner permission to land, despite rain and heavy fog, but asked the pilot to approach the runway from the opposite direction due to a strong headwind. It hit the mountain while circling around to the other side of the airport.

One of its flight recorders has been recovered.

Air China is the country's national flag carrier and one of three major international carriers based in China.