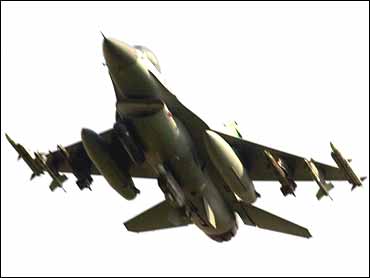 The military sent fighter jets to chase suspicious aircraft 462 times between Sept. 11 and June, nearly seven times as often as the 67 scrambles from the same period a year earlier.

On Sept. 11, flight controllers suspected around 8:25 a.m. EDT that American Airlines Flight 11 from Boston's Logan Airport had been hijacked, but NORAD wasn't notified until 8:40 a.m. — six minutes before the plane struck the World Trade Center in New York City.

"NORAD is now linked up telephonically 24 hours a day, seven days a week, so anything that's an anomaly or a suspected anomaly that's found in the system, NORAD knows about it as quickly as we do," said David Canoles, FAA's manager of air traffic evaluations and investigations.

At a NORAD operations center in Cheyenne Mountain in Colorado Springs, Colo., a noncommissioned officer listens to conversations on the FAA network from all over the United States, said Maj. Douglas Martin, NORAD spokesman.

"If he hears anything that indicates difficulty in the skies, we begin the staff work to scramble," Martin said. Before Sept. 11, the FAA had to telephone NORAD about any possible hijackings.

In June, Air Force jets scrambled three times to intercept small private planes that had wandered into restricted airspace around the White House and around Camp David, the presidential retreat in Maryland.

Jet fighters approaching a suspicious plane might radio the pilot, dip their wings or simply identify the aircraft and break off, Martin said. No intercepted planes have been fired upon since Sept. 11, he said. For that, an order must come from President Bush, Secretary of Defense Secretary Donald Rumsfeld or two designated Air Force generals.

FAA officials held news conferences in Boston, New York and Washington, giving chronological accounts of the terrorist attacks and how they forced an unprecedented shutdown of the U.S. skies.

"We considered it at that time to be a possible hijacking," air traffic manager Glenn Michael said.

The FAA notified NORAD 15 minutes later; three minutes after that, NORAD was told United Airlines Flight 175 had been hijacked.

The first two military interceptors, Air Force F-15 Eagles from Otis Air Force Base in Massachusetts, scrambled airborne at 8:52 a.m., too late to do anything about the second jet heading for the Trade Center or a third heading toward the Pentagon.

Mike McCormick, air traffic control manager at the New York Center — the main control center for the area — made the unprecedented decision at 9:04 a.m. to declare "ATC Zero," meaning that no aircraft could fly into, out of or through the airspace over New York and the western Atlantic.

He made the decision after the second plane, United Flight 175, crashed into the World Trade Center. McCormick said the Boeing 757's transponder was working and he knew where it was headed, even before the Newark Airport Control Tower picked it up visually as it turned and headed back toward the twin towers.

At 9:45 a.m., after the World Trade Center and the Pentagon had been struck by the hijacked planes, the FAA ordered all of the more than 4,000 aircraft in the skies over the United States to land at the nearest airport.