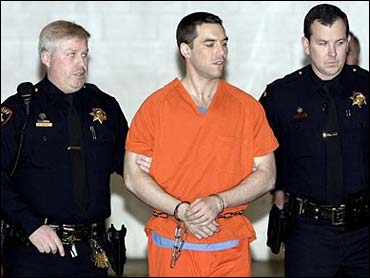 Scott Peterson, newly sentenced to death for the murders of his wife, Laci, and their unborn son, had a relatively uneventful first day and night on death row. But don't tell that to the switchboard operators at San Quentin State Prison in California.

They fielded almost three dozen calls to Peterson from women across the U.S., according to Lt. Vernell Crittendon, senior public information officer for the prison.

And at least two of the callers wanted to propose marriage to Peterson, Crittendon told The Early Show co-anchor Harry Smith.

What's more, Crittendon pointed out, that's not even uncommon for convicted killers: "It's a very common practice that happens. Many of the men on death row that have found wives have met those young ladies after they had received their death sentence and after they arrived here at San Quentin on death row."

Peterson didn't have any visitors on Day One.

He tried to keep up a brave front, but it was clearly just a front, Crittendon observed: "When he first exited the San Mateo sheriff's security van, you could clearly see he was placing a facade of confidence, of calm, but you could quickly see there was clearly this veil of uneasiness. You would see that in how he approached the staff, as we were taking him through the process -- trying to greet us with the soft-spoken, 'Good morning, how are you?' You would notice the occasional uncomfortable smile that he would be putting on his face. He was always polite and spoke in a very non-threatening voice."

Crittendon adds that Peterson read a book supplied by the prison for much of the day. At other times, Peterson rested or slept.