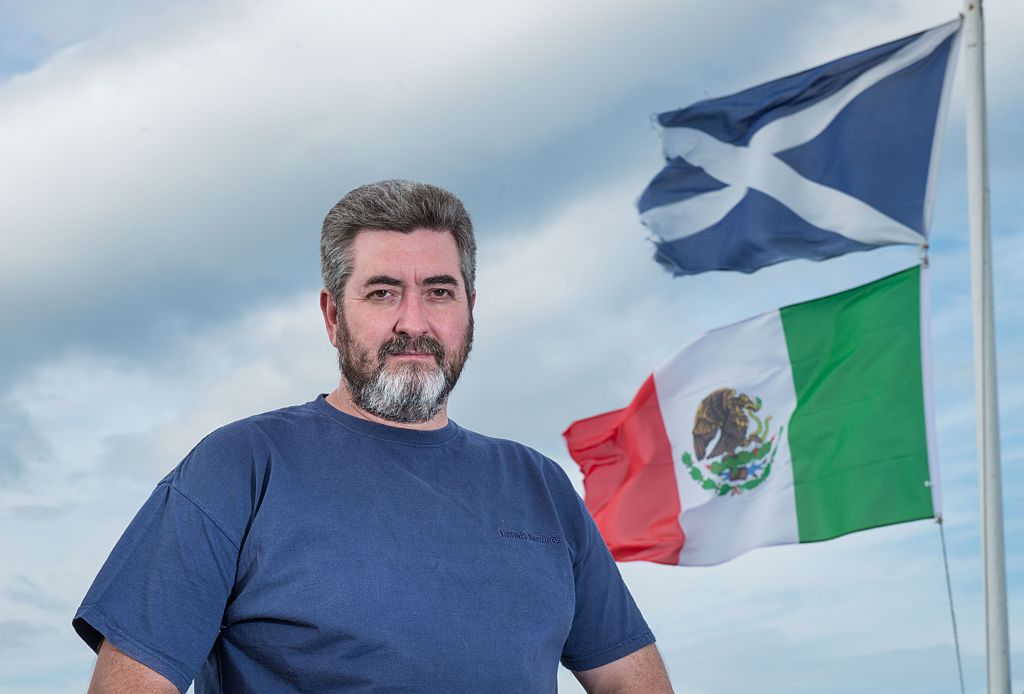 LONDON -- Beaten but defiant, a couple of Donald Trump's reluctant neighbors in Scotland have hoisted Mexican flags on their properties in the hopes of goading, just a little bit, the presumptive U.S. presidential candidate during his upcoming visit.

The protests come in the Mexican tricolor and with a Scottish accent, but the message for the man who muscled his way into Aberdeenshire to build a golf resort on the pristine, weather-battered coast is clear.

"The flag is up primarily to show solidarity with the Mexican people and anybody else that Donald Trump has decried, defamed, lied about, harassed or attempted to intimidate throughout his career," David Milne told French news agency AFP. "We know exactly what that is like because we've been there, we've had that."

As a business venture, the Trump International Golf Links could be viewed as a failure for Trump.

The Independent newspaper cites Britain's official government keeper of corporate earnings, Company House, as saying Trump's course has operated at a loss of millions of dollars per year since it opened.

But in the eyes of locals like Milne and Michael Forbes, that's likely small consolation after their bitter battle with the American property magnate over the construction of the course in the first place.

Milne, who's longtime home overlooks the 18th hole and clubhouse at the resort (or did) in the village of Balmedie, fought to block the project from the beginning.

"It would destroy an area of outstanding natural beauty," he told Sky News in 2008. "Why should Donald Trump get preferential treatment when other builders would be turned down straight away?"

The local government first rejected the plans, over concerns raised by environmentalists and residents about building on the sensitive seaside ecosystem. But in the end Trump's massive influence, promise to bring hundreds of jobs and millions of dollars into the region, won out. The course opened for business in 2012.

Forbes, a fisherman who lives in the middle of the vast parcel of land purchased by Trump, refused to sell his plot for the development -- a plot the now-presidential candidate derided as a "disgrace" for its unkempt appearance.

The verbal fight got personal, and ugly. Trump called Forbes' land a "toxic dump" and "disgusting."

Forbes said Trump could increase the roughly $700,000 he had offered for the parcel of land "to millions if he wants, it'd still be no."

Again, Forbes won the battle, but he lost the war; Trump's construction crews dumped enough dirt from their excavations around Forbes' home to create a six-yard-high earthen wall, completely blocking views of the property from the golf club.

Both men have Mexican flags flying high over their properties -- a jab at Trump who has vowed to build a wall along the Mexican-U.S. border (at Mexico's expense), and who has accused Mexico of sending rapists and murderers north of the border.

"He (Trump) can see it, without any shadow of a doubt," Milne told AFP. "The main point is to make it quite clear to him that we have not forgotten the way we were treated and we respect the other people who he has attacked verbally."

Later this week, Trump will arrive in Balmedie to officially reopen his resort after a renovation.

Regardless of whether he sees (or is in the least bit bothered by) the Scotsmen's flags, Trump's decision to visit Scotland for what amounts to a corporate appearance, with the presidential campaign in full swing, has raised questions at home.

"People who are serious about running for president, don't run off to Scotland where there are no votes," former Ted Cruz adviser Rick Tyler told the Associated Press.