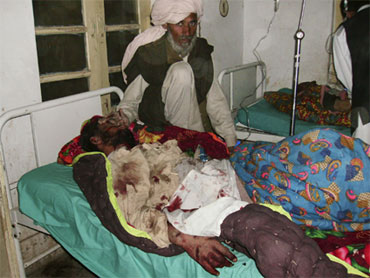 A suicide bomber detonated his explosives-packed vehicle in a crowd of people watching a volleyball tournament in northwest Pakistan, killing 88 people in the deadliest attack in the country in more than two months.

The attack in Lakki Marwat city on Friday appeared to be retaliation against residents who formed militias to drive militants out of the area and a meeting of anti-Taliban leaders being held nearby may have been the actual target, police said.

The blast underscores the difficulty Pakistan has had in stopping militants whose reach extends far beyond Pakistan's lawless tribal belt and who appear increasingly willing to strike civilians as well as security forces.

The attack was not far from South Waziristan, where the army is waging an offensive against the Pakistani Taliban. That operation has provoked apparent reprisal attacks that have killed more than 500 people since October.

No group claimed responsibility for Friday's blast, but that is not uncommon when large numbers of civilians are killed.

"The locality has been a hub of militants. Locals set up a militia and expelled the militants from this area. This attack seems to be reaction to their expulsion," local police chief Ayub Khan told reporters.

Khan said an anti-Taliban meeting of local tribal elders in a mosque close to the field where the tournament was being held was the real target of the attack, but the driver failed to reach it.

The bomber set off some 550 pounds of high-intensity explosives loaded in the car at the field, which lies in a congested neighborhood, Khan said.

"I fear the death toll will rise as there are a number of people who are in extremely serious condition," a senior government official in Peshawar, the provincial capital of the NWFP, told CBS News on condition of anonymity. "This is one of the worst attacks in recent times," he said.

In Islamabad, a senior government official who regularly deals with security issues warned, the attack suggests that Taliban militants (who were likely linked to it) were seeking to cause large numbers of human casualties.

Elsewhere in the northwest, a roadside bomb exploded near a car in the Bajur tribal region, killing an anti-Taliban tribal elder and five of his family members, said Nasib Shah, a local government official.

Bajur was the focus of a 2008-09 army offensive but still suffers some militant violence. Tribal leaders who support the government against the Taliban are frequent targets of attacks.

On Monday, at least 43 people were killed in an attack on an Islamic religious procession in the southern port city of Karachi. (A Taliban militant later claimed responsibility.) "The Taliban seem hell-bent on causing large scale human casualties and causing large-scale panic," said the official in Islamabad who also spoke to CBS News on condition of anonymity.

Monday's bombing occurred in the midst of a procession of minority Shiite Muslims during the Islamic holy month of Muharram. Afterward, angry protesters went on a rampage, setting fires to about 2,000 stores that took three days to completely put out.

Interior Minister Rehman Malik, on a visit to Karachi, said investigators were still determining if the attack was a suicide bombing.

He also questioned the claim of purported Taliban spokesman Asmatullah Shaheen that the militant group was behind the attack. Local news reports on Friday quoted a more prominent Taliban spokesman, Azam Tariq, as denying that the Pakistani Taliban's central leadership had approved the attack, though he did not rule out the possibility that Shaheen's group had carried it out without approval.

Also on Friday, a suspected U.S. missile struck a car carrying alleged militants in North Waziristan tribal region, killing three men, two intelligence officials said. It was the second such strike in less than a day.

The strikes are part of the U.S. campaign to eliminate high-value militant targets that use Pakistan as a safe haven to plan attacks in neighboring Afghanistan and on the West.

Friday's strike happened near Mir Ali, a major town in the region, two intelligence officials said on condition of anonymity because they were not authorized to speak on the record. Shortly afterward, Taliban fighters arrived at the scene of the attack in the village of Ghundi and moved the bodies to an undisclosed location, the officials said.

Altogether, more than 500 people have been killed in bomb attacks since October, when the army launched a major anti-Taliban offensive, reports CBS News correspondent Elizabeth Palmer.

U.S. officials rarely discuss the strikes, and Pakistan publicly condemns them, though it is widely believed to aid them secretly.