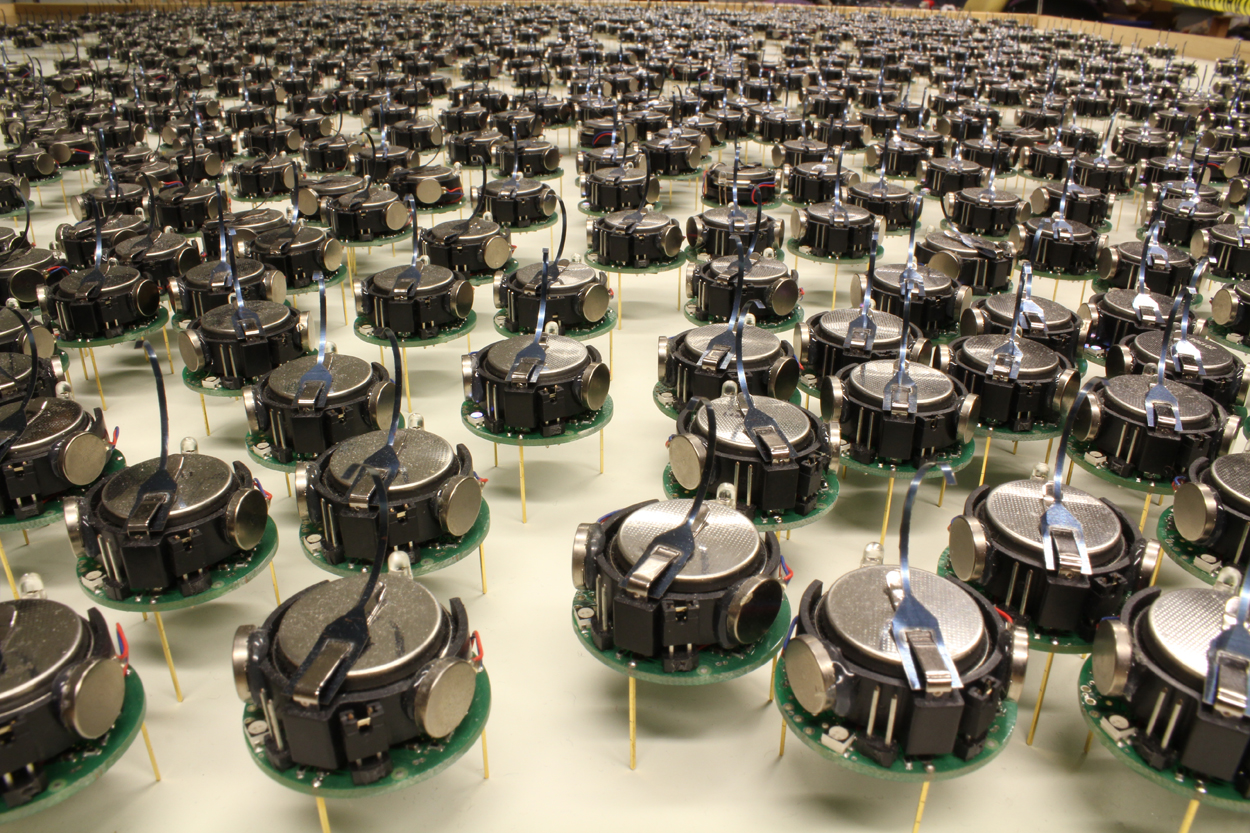 Researchers have devised a "flash mob" of more than 1,000 tiny robots that can move like a swarm of bees and assemble themselves in various shapes, such as those of sea stars or letters of the alphabet.

The robots, called Kilobots, were designed to mimic the behavior of insects and other organisms that can cooperate with each other in large groups. Just like a swarm of bees or a flock of birds, an army of hundreds of robots can gather and collaborate with each other, moving into formation without any human help.

The Kilobots use vibration motors to slide across the surface and infrared lights to communicate with their neighbors.

To optimize the collaborative power of the Kilobots, the researchers equipped them with cooperative monitoring features. The Kilobots can even correct their own mistakes; if traffic jam forms somewhere within the robot swarm, or if a robot moves off-course, nearby robots can notice the problem and work with each other to fix it.

In the sequence of images below, the robots are sent an electronic instruction to form a two-dimensional shape like a letter K (for "Kilobots") and a starfish. Then they proceed to assemble themselves into the right formation.

"The beauty of biological systems is that they are elegantly simple--and yet, in large numbers, accomplish the seemingly impossible," study author Radhika Nagpal, a professor of computer science at the Harvard School of Engineering and Applied Sciences (SEAS) and a core faculty member at the Wyss Institute for Biologically Inspired Engineering at Harvard University, said in a statement. "At some level you no longer even see the individuals; you just see the collective as an entity to itself."

"Biological collectives involve enormous numbers of cooperating entities -- whether you think of cells or insects or animal -- that together accomplish a single task that is a magnitude beyond the scale of any individual," added Michael Rubenstein, a research associate at Harvard SEAS and the Wyss Institute.

For example, ant colonies form rafts and bridges to cross difficult terrain, he said, whereas social amoebas join each other to create a fruiting body and escape the local environment if they encounter a scarcity of food.

"We are especially inspired by systems where individuals can self-assemble together to solve problems," Nagpal said. Her research group previously devised a group of termite-inspired robots that could collaborate with each other to perform construction tasks.

Such self-organizing robotic systems have been devised before, but they have been limited to much smaller numbers of robots -- until now.

Here you can take a closer look at the bots:

However, even these "clever" bots have certain limitations that stem from their relatively simple design. Each robot can communicate with a few of its neighbors through infrared transmitters and receivers, but the bots have no access to a bird's eye view of the entire group.

"These robots are much simpler than many conventional robots, and as a result, their abilities are more variable and less reliable," Rubenstein said. "For example, the Kilobots have trouble moving in a straight line, and the accuracy of distance sensing can vary from robot to robot."

The study describing the Kilobots was published Thursday in the journal Science.