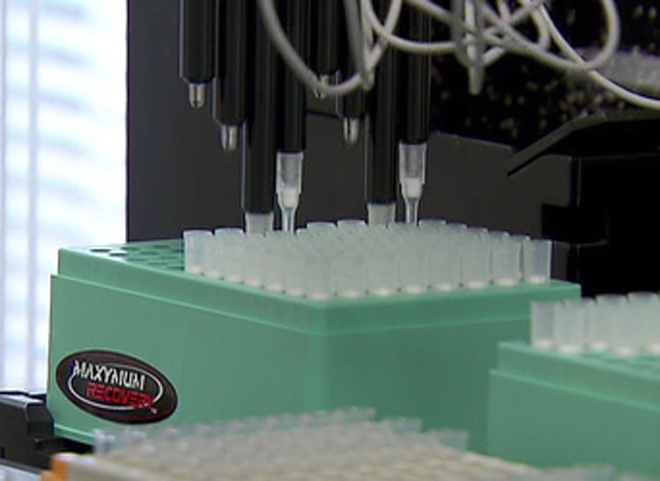 Scientists have successfully turned off the chromosome defect that causes Down syndrome.

Down syndrome, also called Trisomy 21, is a genetic condition in which a person has three copies of chromosome 21, resulting in 47 chromosomes instead of 46. It is one of the most common causes of human birth defects. According to the Centers for Disease Control and Prevention, Down syndrome had an incidence rate of 11.8 babies per 10,000 live births from 1999 to 2003.

While gene therapy has been used to fix defective genes, this is the first time scientists were able to completely shut off an entire chromosome, they said.

Researchers found a way to copy the natural way the body turns off one of the two X chromosomes that all female mammals have. They found that both chromosomes have a gene they called "XIST" that when turned on, makes an RNA molecule that envelops a chromosome. This stops this chromosome from having its genes expressed. When the XIST is turned on in women, it quiets their other X chromosome.

The researchers then put the XIST gene in one of the three copies of chromosome 21 found in the pluripotent stem cells of a person with Down syndrome. They also implanted a "switch" that allowed the researchers to turn on XIST when the cells were exposed to an antibiotic called doxycycline.

The scientists were able to coat the third copy of chromosome 21, which theoretically would lessen the effects of Down syndrome, they said. The rest of the cells that were developed appeared to be normal.

"The research means that we have a new way -- right away -- to study the cellular basis for Down's syndrome, that could help identify drugs for Down's syndrome," lead author Jeanne Lawrence, a cell biologist at the University of Massachusetts Medical School in Worcester, Mass., said to the BBC.

"At the same time we have made it conceivable -- not necessarily possible or effective, that still needs to be proven -- but conceivable that you could use just a single gene to correct the over-expression of the whole chromosome. So it makes genetic therapy for Down's syndrome more conceivable where it really wasn't before," she added.

The study appeared in the July 17 issue of Nature.

Dr. Diana Bianchi, executive director of the Mother Infant Research Institute at Tufts Medical Center, said that scientists were impressed when Lawrence first presented the data at a conference.

"I really believe people's jaws dropped at that meeting," she said to the Boston Globe.

Down syndrome can cause varying symptoms in people. Physical signs can include decreased muscle tone, excess skin at the nape of the neck, flattened nose, separated joints between the skull bones, a single crease in the palm of the hand, small ears, small mouth, upward slanding eyes, short wide hands with short fingers and white spots on the colored part of the eye. People with Down syndrome also develop slower than usual, and may have some cognitive problems revolving around impulse control, poor judgment, short attention span and slow learning.

Some patients are also reported as suffering from other symptoms like birth defects, dementia, eye problems, hearing problems and sleep apnea. Early and massive vomiting, hip problems, constipation problems and tooth problems have also been observed.

A new blood test may present a less-invasive way for mothers to know if they are carrying children with the defect.

Down's Syndrome Association chief executive Carol Boys said to the Telegraph that the research was "exciting."

"The findings could have serious implications for future work that may be of real benefit to people with Down's syndrome," she pointed out.