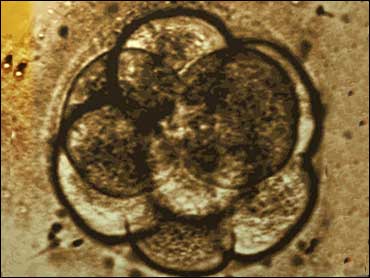 Snails, fleas and on very rare occasion sharks have been known to give birth in the wild without the aid of sperm.

It's called parthenogenesis — Greek for "virgin birth." Now a few scientists are trying to take males out of the human equation as well, not to create babies but to develop stem cells for medical research.

The hope is to trick human eggs into believing they've been fertilized.

The ultimate goal is to harvest human embryonic stem cells without fertilized eggs or cloned embryos, the two most popular and controversial methods of doing such research.

Some researchers view parthenogenesis as a defense against complaints that their work is unethical.

Human egg cells can be duped with chemicals and electric shocks to begin growing like embryos, which are coveted as stem cell sources. Researchers have harvested stem cells from unfertilized mouse and monkey eggs that were coaxed to grow through parthenogenesis.

Lanza and like-minded scientists insist the technology can't produce babies. No mammal has ever been known to give birth through parthenogenesis, and mouse, monkey and human embryos created this way haven't survived for more than several days.

Stem cell opponents, though, use the same reasoning to argue that parthenogenesis may be even more appalling to them than cloning.

They suggest that the embryos died quickly because of genetic defects inherent in the process.

"These could be very severely damaged human organisms," said Richard Doerflinger of the U.S. Conference of Catholic Bishops. "This is a very bizarre technique."

"We are interested in any new way to advance stem cell research without destroying human life," Doerflinger added. "But they haven't proved parthenogenesis is a solution."

Experts in the field stress that much more research is needed to ensure that stem cells produced this way are safe and effective for use in human therapies.

Still, they see promise with parthenogenesis. In the current issue of the scientific journal Stem Cells, researchers from Gaithersburg, Md.-based Stemron Corp. reported success in growing human embryos through parthenogenesis.

And on Wednesday, University of Pennsylvania researchers announced that they turned mouse embryonic stem cells into eggs, which through parthenogenesis began developing as embryos.

Embryonic stem cells hold great promise, and researchers have been searching for nearly 20 years to find a bountiful source for them.

Stem cells can grow into virtually any cell in the body, and researchers believe they could be used to grow new heart, liver, brain or pancreas cells which then could be used to repair ailing organs.

To make these new organ cells compatible with a patient, researchers say they would have to clone an embryo using the nucleus from a cell of the patient. The new stem cells would be removed and then grown into the target cells.

"The beneficial aspects of parthenogenesis is that it doesn't involve fertilized eggs," said Jerry Hall, an embryologist at the Institute for Reproductive Medicine and Genetic Testing in Los Angeles who calls the creation a "parthenote."

"By definition they are not embryos," Hall said.

Some supporters of this research, including Lanza, differ on this semantic point, saying the creations are clearly "embryos." And because these creations are destroyed in the process of harvesting the stem cells, opponents say this method too is akin to taking human life.

Hall has confined most of his work to mouse eggs because he lacks equipment and money needed to put real effort into human parthenogenesis research. The stem cell field in general is plagued by political, financial and scientific problems, including President Bush's ban on federal funding for research into new lines of stem cells. There are scant resources available for the still-exotic research.

Indeed, Stemron appears to be out of business.

The last known phone number is disconnected, directory assistance has no listing, and the company's Web site is down. Chief executive Arthur Mandell didn't return phone calls left on voice mail at a different company.

But before Stemron went dark, its researchers managed to publish the most advanced work yet involving human parthenogenesis.

The Stemron researchers said they coaxed five of 25 eggs donated by two women to grow to the point where stem cells are expected to appear. The researchers managed to obtain stem cells from one of the eggs, but the cells died after a few days.

David Prentice, an Indiana State University cellular biologist and foe of embryonic stem cell research, said no one knows how the science will develop.

"It's an open question whether this will ever develop into a live birth," Prentice said. "It ends up being a matter of technique, and eventually somebody might fiddle around and get a parthenogenetic birth."