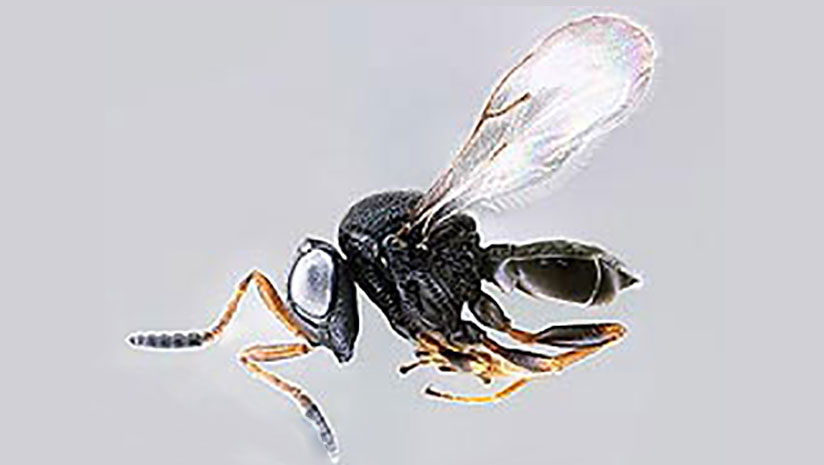 SPOKANE, Wash. -- Scientists from Washington State University have discovered a parasitic wasp in the state that kills its host like a scene from the movie "Alien." But the discovery is good news because the wasp kills a type of stink bug that harms fruit orchards.

Two small clusters of the wasp were discovered this summer in Vancouver, Washington.

The tiny female wasps lay eggs inside clusters of brown marmorated stink bug eggs. After a wasp egg hatches, the larva eats the stink bug host, and then bursts out as an adult wasp, WSU officials said.

"We did not expect to find this wasp here and are very excited about the discovery," WSU entomologist Elizabeth Beers said. "In the insect world, we struck it rich."

The wasp is known as Trissolcus japonicus and hails from Asia. It is being studied under quarantine in the U.S. as a possible weapon against the stink bug.

Two small clusters of the wasp, which does not sting, were discovered in Vancouver, Washington, in August and September by a field technician with WSU's research lab in Wenatchee.

Since 2007, the U.S. Department of Agriculture has directed studies of the wasp in quarantine laboratories to determine if it can be released in the wild to destroy the crop-wrecking brown marmorated stink bug.

The stink bug species, which also originated in Asia, has caused millions of dollars in damage to fruit orchards in the Mid-Atlantic region since it was discovered in Pennsylvania less than two decades ago. The bugs when crushed emit a stench like dirty socks, hence their name.

The stink bug has been moving West, and it has been found in Washington, Oregon and parts of California, WSU said. A team of insect experts has been searching for ways to stop it, WSU said.

"Because the brown marmorated stink bug is not native to this country, it's less likely that natural enemies exist here to destroy it," said Beers, WSU's representative on the team that is comprised of more than 50 scientists from 10 institutions. "As it turns out, there's one right under our noses."

"When I heard the news, I thought: 'Oh my gosh, this is a biocontrol game-changer,' " said U.S. Department of Agriculture entomologist Tracy Leskey in West Virginia, leader of the national stink bug research team.