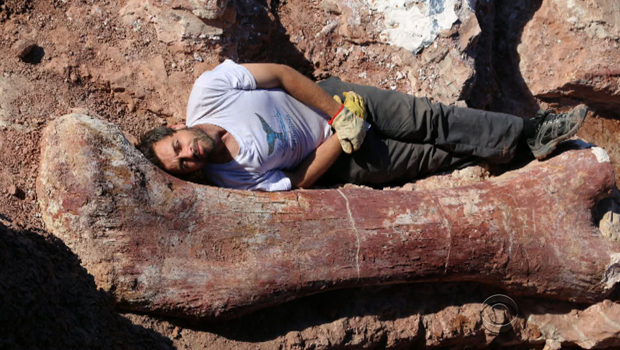 Scientists in Argentina have announced the biggest discovery ever made in the field of paleontology. Literally the biggest.

Bones were found of a dinosaur believed to have been the largest creature ever to walk the earth.

To get a sense of how big the titanosaur was you have to look at its thigh bone next to scientist Diego Pol, one of the lead paleontologists on the dig. The team began uncovering the fossilized remains of this new species of titanosaur last January in Argentina.

"We are really, really excited about this discovery," he said.

Pol said the titanosaurs roamed the earth about 90 million years ago.

Standing with its long neck up, the dinosaur would go head-to-head with a seven-story building and weigh 77 tons. That's equal to about 14 adult elephants.

The fossils were first discovered by a local farmer in 2012.

The new species still doesn't have a name but it will likely honor the area in which it was found and of course, the size of the dinosaur.

CBS Evening News, May 25, 2022
Thanks for reading CBS NEWS.
Create your free account or log in
for more features.
View CBS News In
CBS News App Open
Chrome Safari Continue
Be the first to know
Get browser notifications for breaking news, live events, and exclusive reporting.