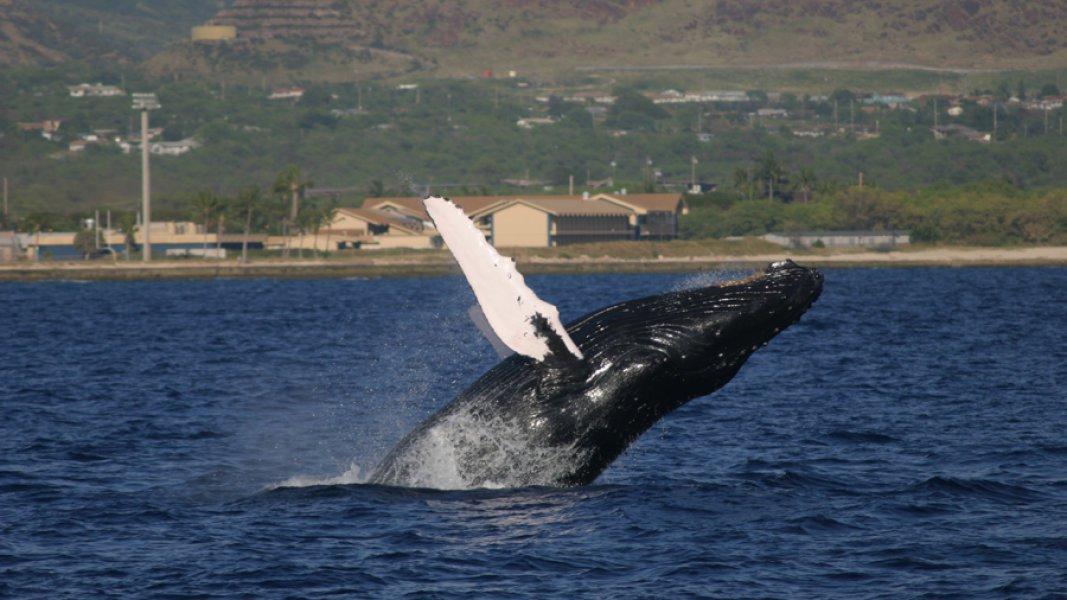 The “songs” of humpback whales are very distinct long, mournful calls. A new study from the Woods Hole Oceanographic Institute (WHOI) looks at a previously unknown element of the sounds that could unlock more crucial information on this form of communication between the sea giants.

While studying humpback whales off the coast of Hawaiian island Maui, WHOI biologist Aran Mooney and his team were measuring two separate elements of whale songs when they made the discovery. They were looking at both pressure waves, which are the kind of sound waves that smack into our eardrums, allowing us to hear things; and particle motion, which is the physical vibration of a substance while sound moves through it, WHOI explained.

Mooney was struck by how far the particle motion generated by the whales traveled through the water.

“We threw our gear over the side, and let ourselves drift away from whales while measuring both particle motion and sound pressure, Mooney said in a press release. “We didn’t expect particle motion to be projected much at all — just a few meters away at most. But as we got progressively further away, the particle motion stayed loud and clear.”

Mooney and his team measured the particle motion as far away as 200 meters from the humpbacks. They also found that particle motion in lower sound frequencies could travel a much greater distance than what they recorded.

“It’s a whole other avenue of sound that we never knew whales could use,” he said.

The study is significant because particle motion in whale songs hasn’t really studied much, and a better understanding of the mechanics could shed light on a crucial form of whale-to-whale communication

Pressure waves are detected through a hydrophone, an underwater microphone. This is much easier to detect than particle motion, which requires researchers to use underwater accelerometers, which are not as widely available to scientists. Mooney and his team had both of these tools for this study, which enabled them to make their breakthrough recordings.

While the study doesn’t reveal whether humpback whales can actually sense particle motion itself, the researchers say this could be a possibility given the fact that whale ear bones are constructed in a way that could feel low-frequency vibrations. Mooney said that since the whales’ ear bones are affixed to their skulls they offer a through-line for ears to pick up vibrations from the surrounding water.

“Does a whale’s lower jaw act like a tuning fork to direct vibrations to their ears? Previous papers have shown this bone conduction might be a viable mode of hearing,” Mooney said.

This isn’t unusual in other large mammals. For instance, elephants are able to detect ultra-low frequency vibrations through their feet, which allows them to locate their herds from miles away.

A key concern that this raises involves human interference — do frequencies from man-made sounds that whales pick up disrupt their communication with one another?

“Most human-made noise in the ocean [is] low frequency, and the level of sound is doubling every decade. There’s constantly more shipping, more seismic exploration for oil and gas,” Mooney said. “We humans don’t hear well in water, so we overlook noise in the ocean, but it’s very relevant cue for marine animals.”

“This could be a major concern for whales,” he added.

The paper was published online in the journal Biology Letters.