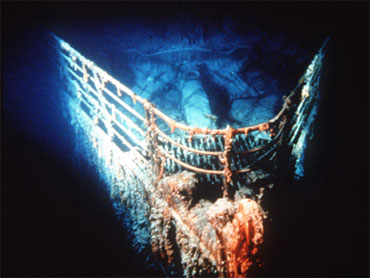 A team of scientists will launch an expedition to the Titanic next month to assess the deteriorating condition of the world's most famous shipwreck and create a detailed three-dimensional map that will "virtually raise the Titanic" for the public.

The expedition to the site 2 and 1/2 miles beneath the North Atlantic is billed as the most advanced scientific mission to the Titanic wreck since its discovery 25 years ago.

The 20-day expedition is to leave St. John's, Newfoundland, on Aug. 18 under a partnership between RMS Titanic Inc., which has exclusive salvage rights to the wreck, and the Woods Hole Oceanographic Institution in Massachusetts. The expedition will not collect artifacts but will probe a 2-by-3 mile debris field where hundreds of thousands of artifacts remain scattered.

Some of the world's most frequent visitors to the site will be part of the expedition along with a who's who of underwater scientists and organizations such as the National Oceanic and Atmospheric Administration.

Organizers say the new scientific data and images will ultimately be accessible to the public.

"For the first time, we're really going to treat it as an archaeological site with two things in mind," David Gallo, an expedition leader and Woods Hole scientist, told The Associated Press on Monday. "One is to preserve the legacy of the ship by enhancing the story of the Titanic itself. The second part is to really understand what the state of the ship is."

The Titanic struck ice and sank on its maiden voyage in international waters on April 15, 1912, leaving 1,522 people dead.

Since oceanographer Robert Ballard and an international team discovered the Titanic in 1985, most of the expeditions have either been to photograph the wreck or gather thousands of artifacts, like fine china, shoes and ship fittings. "Titanic" director James Cameron has also led teams to the wreck to record the bow and the stern, which separated during the sinking and now lie one-third of a mile apart.

RMS Titanic made the last expedition to site in 2004. The company, a subsidiary of Premier Exhibitions Inc. of Atlanta, conducts traveling displays of the Titanic artifacts, which the company says have been viewed by tens of millions of people worldwide.

"We believe there's still a number of really exciting mysteries to be discovered at the wreck site," said Chris Davino, president of and CEO of Premier Exhibitions and RMS Titanic. "It's our contention that substantial portions of the wreck site have never really been properly studied."

RMS Titanic is bankrolling the expedition. Davino declined to state the cost of the exploration other than to say it will be millions of dollars.

The "dream team" of archaeologists, oceanographers and other scientists want to get the best assessment yet on the two main sections of the ship, which have been subjected to fierce deep-ocean currents, salt water and intense pressure.

Gallo said while the rate of Titanic's deterioration is not known, the expedition approaches the mission with a sense of urgency.

"We see places where it looks like the upper decks are getting thin, the walls are thin, the ceilings may be collapsing a bit," he said. "We hear all these anecdotal things about the ship is rusting away, it's collapsing on itself. No one really knows."

The expedition will use imaging technology and sonar devices that never have been used before on the Titanic wreck and to probe nearly a century of sediment in the debris field to seek a full inventory of the ship's artifacts.

"We're actually treating it like a crime scene," Gallo said. "We want to know what's out there in that debris field, what the stern and the bow are looking like."

The expedition will be based on the RV Jean Charcot, a 250-foot (76-meter) research vessel with a crew of 20. Three submersibles and the latest sonar, acoustic and filming technology will also be part of the expedition.

"Never before have we had the scientific and technological means to discover so much of an expedition to Titanic," said P.H. Nargeolet, who is co-leading the expedition. He has made more than 30 dives to the wreck.

Bill Lange, a Woods Hole scientist who will lead the optical survey and will be one of the first to visit the wreck, said a key analysis will be comparing images from the first expedition 25 years ago and new images to measure decay and erosion.

"We're going to see things we haven't seen before. That's a given," he said. "The technology has really evolved in the last 25 years."

Davino said he anticipates future salvage expeditions to the wreck, and Gallo said he doesn't expect the science will end with one trip.

"I'm sure there will be future expeditions because this is the just the beginning of a whole new era of these kind of expeditions to Titanic - serious, archaeological mapping expeditions," Gallo said.

RMS Titanic is still awaiting a judge's ruling in Norfolk, Virginia. on the 5,500 artifacts it has in its possession.

The company is seeking limited ownership of the artifacts as compensation for its salvage efforts. In its court filing for a salvage award, the company put the fair market value of the collection at $110.9 million.

U.S. District Judge Rebecca Beach Smith, a maritime jurist who is presiding over the hearings, has called the wreck an "international treasure."