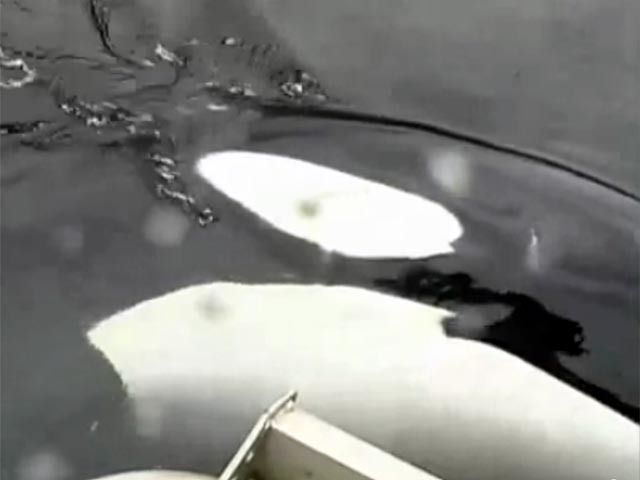 Joking aside, this video is remarkable. Luna the orca was a minor celebrity of Pugent Sound and Canada's Nootka Sound. If the video description is to be believed, Luna is making an attempt at communication by imitating the sounds of a motor boat.

"Luna was a little wild orca-boy who lost his family and, after that, started to look for contact with people which, in my opinion, is the best example of orca's demand for social intercourse," says YouTube uploader Victor.

UPDATE: We actually got a very nice comment from the person who shot this video with more information, and so would like to include it in full here and encourage people to go see her the documentary if they're curious to know more about Luna:

It's great to see interest in Luna! I shot this footage of Luna in October, 2004 - and we are now releasing our feature documentary about Luna, called THE WHALE, which is narrated by Ryan Reynolds. It's playing now (Sept 30) in theatres in NYC and LA, and will open in other cities in the coming weeks. For more info, check out thewhalemovie(dot)com - and if you come see the film, you can see more of Luna's amazing efforts to connect with people - and the questions that these kind of interactions raise.