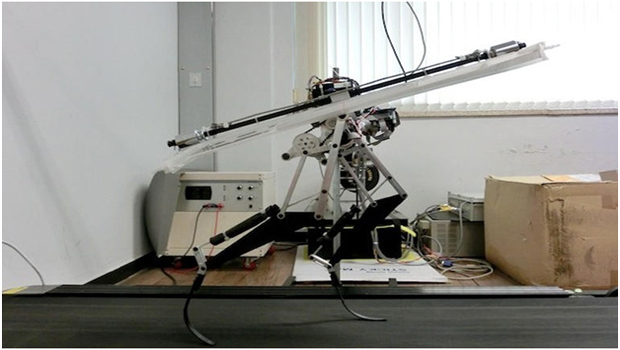 In 2012, robots became faster than humans, when DARPA's Cheetah robot -- inspired by the fastest land animal -- surpassed the fastest man on earth, Olympic runner Usain Bolt. However, other robots may soon catch up, and researchers from Korea Advanced Institute of Science and Technology's (KAIST) are working on it.

Taking inspiration from the Cretaceous era, the Raptor -- named after the velociraptor dinosaur -- can run at 28.6 mph. Bolt's top speed is 27.44 mph.

Running on its two legs, the Raptor is designed to be as lightweight and minimal as possible. It has two flexible carbon-fiber prosthetic blades on lightweight legs that have just one motor apiece, according to CNET. It also has a tail of sorts -- a pole fixed to the side of the robot that swings as it runs -- to provide balance.

Still, the Raptor is no match for the DARPA robot, who still has the title of world's fastest robot. Created by Boston Dynamics, the Cheetah was designed to maneuver difficult terrain. DARPA's Maximum Mobility and Manipulation (M3) program hopes to create and demonstrate advances in robot mobility and manipulation capabilities. Unlike current robots, which use wheels to navigate through such terrain, the most difficult -- such as high obstacles and deep ditches -- demand the use of legs, DARPA officials explained in a 2012 press release.

Unlike the Cheetah, this was only the Raptor's first test. When the Cheetah debuted in March 2012, it only achieved a top speed of 18 mph. Still, that blew away the previous 13.1 mph record for fastest land robot set in 1989.

However, both robots are still required to be attached to a rail to keep from falling over. An untethered version of Cheetah -- called WildCat -- was unveiled in 2013, running at top speeds of about 16 mph.

With the Raptor, it may continue to get better from here. The KAIST team is currently working to increase their robot's speeds, but also improving its control and stability, reports Discovery News.

Whether inspired by a dinosaur or a feline, one thing's for sure: Robots will continue to get better, stronger, faster.