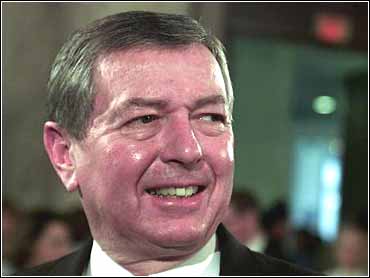 Not even the candidates are confident that Tuesday's mayoral primary can overcome a vote rigging scandal, conspiracy allegations and the arrest of a key election official on charges of soliciting a child for sex.

U.S. Attorney General John Ashcroft is sending two lawyers to monitor the polls. Secretary of State Matt Blunt, a Republican, is to keep watch personally at the election board office.

"I do have some concerns about the election board's ability to carry this thing out," candidate Francis Slay said. "I don't want anyone stealing this election."

Tuesday's primary is seen as tantamount to deciding the general election because the city's voters are predominantly Democratic. It's been 56 years since a Republican has won the top city seat, but lately the focus has been more on problems than policies.

Mayor Clarence Harmon admitted recently that voter fraud is "widespread and insidious in the body politic."

"This is a little river town that's got a very bad history of very bad election fraud," Harmon said. "If we don't straighten out this fundamental issue, what's going to happen to us?"

The latest allegations began Nov. 7 when hundreds of voters complained they were kept away from polling stations on Election Day.

Arguing that the polls were too crowded, Democrats won a court order to keep polls open until 10 p.m., three hours past the legal closing time. Outraged Republicans convinced an appeals court judge to close the polls 45 minutes later, alleging a Democratic conspiracy to pack the polls with voters, legitimate or otherwise.

The problems intensified Feb. 7, the last day to register to vote in the mayoral primary, when an unidentified person handed in about 3,800 registration cards. Many of the cards tried to register prominent St. Louis residents - even a few dead ones - and most appeared to be filled out by the same hand.

Republican elections director Kevin Coan was leading one of two investigations into the voting irregularities. But on Friday, Coan was arrested and charged with trying to buy sex from a 14-year-old girl, whom he allegedly met on the Internet.

Police said the teen-age girl he was to meet was really a male police officer from Alton, Ill., who had set up a high-tech sting. Friends of Coan claim he was set up and believed he was meeting his wife.

Freeman Bosley Jr., a Democrat who became the city's first black mayor in 1997, said he hopes the controversies do not scare minority voters away from the polls. But Bosley also noted the history of problems, including a "pattern and practice of voter intimidation and disenfranchisement in St. Louis elections."

MMI The Associated Press. All Rights Reserved. This material may not be published, broadcast, rewritten, or redistributed