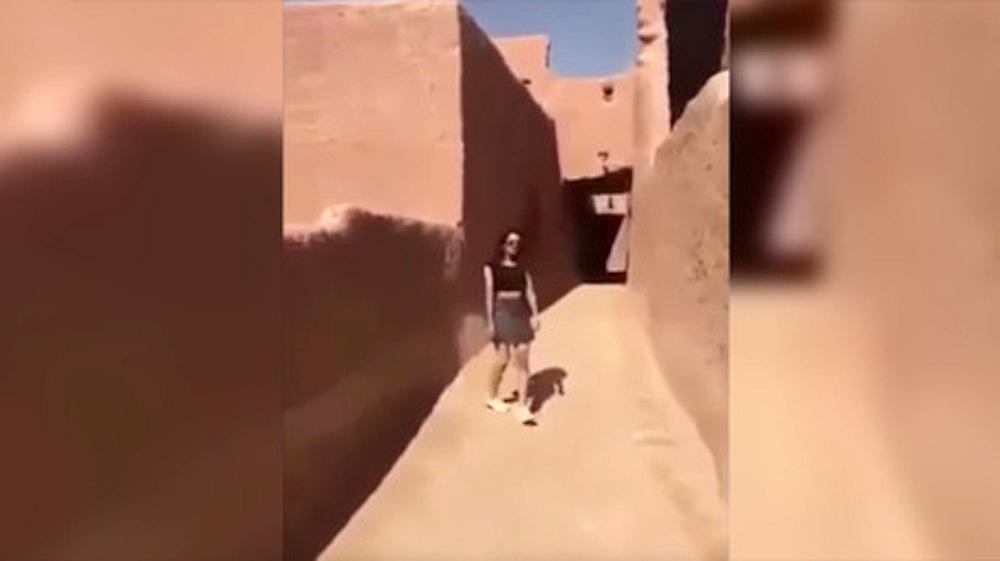 DUBAI, United Arab Emirates -- Police in Saudi Arabia have arrested a young woman who wore a miniskirt in public and posted the video online, sparking backlash from people who say she flagrantly violated the kingdom's conservative Islamic dress code.

The woman, whose name was not given, was detained by police in the capital, Riyadh, for wearing "immodest clothes" that contradicted the country's conservative Islamic dress code, state media reported Tuesday. Police referred her case to the public prosecutor, according to the official Twitter account of state-run TV channel al-Ekhbariya.

The young Saudi woman drew attention over the weekend when she shared on Snapchat a video of herself walking in a historic village north of the capital wearing a miniskirt and crop top, and showing her hair. In the now-viral video, the woman is filmed walking around the desert region of Najd, where many of Saudi Arabia's most conservative tribes and families are from.

CBS News has not confirmed the authenticity of the following video clip -- which has been posted on Twitter -- but it appears to show the woman in a miniskirt and black crop top as many have described:

Social media is wildly popular in Saudi Arabia as a space to vent frustrations and gauge public opinion. The outcry against the video and the woman's subsequent arrest reveal how powerful and widespread conservative views are in the kingdom, despite recent moves by Saudi Arabia to modernize and loosen some rules.

The country's 31-year-old heir to the throne, Crown Prince Mohammed bin Salman, has pushed for greater openings for entertainment in part to appease the youth, who are active on social media and can bypass government censors online. More than half of Saudi Arabia's population is under 25.

The government announced last week that girls would be allowed for the first time to play sports in public school and have access to physical education classes. The powers of the kingdom's religious police have also been curtailed, and they are officially no longer allowed to arrest people.

Despite these moves, strict gender segregation rules and other restrictions on women remain in place. Women are not allowed to drive in Saudi Arabia and cannot obtain a passport or travel abroad without a male relative's permission.

After the woman's video surfaced, some Saudis expressed alarm, saying that Twitter was being used as a tool to out other citizens.

Ibrahim al-Munayif, a Saudi writer with more than 41,000 followers on Twitter, wrote on his official account that allowing people to disobey the law leads to chaos.

Others defended her by posting images from President Trump's visit to Saudi Arabia in May, in which first lady Melania Trump and his daughter Ivanka, though modestly dressed in higher necklines and longer sleeves, shunned wearing a head cover or the abaya.

One Twitter user, whose post was shared more than 1,700 times, superimposed an image of Ivanka's face on the young Saudi woman's body, writing: "Enough already, the situation has been solved."

Others wrote that had the woman been a foreigner, people would be talking about her beauty, but because she is Saudi, they are calling for arrest.

The woman's image was blurred on Saudi news websites reporting on the case. It is common in Saudi Arabia to see heavily blurred or pixelated images of women's faces on billboards and storefronts -- in stark contrast to the many towering images of senior male royals displayed across the country.