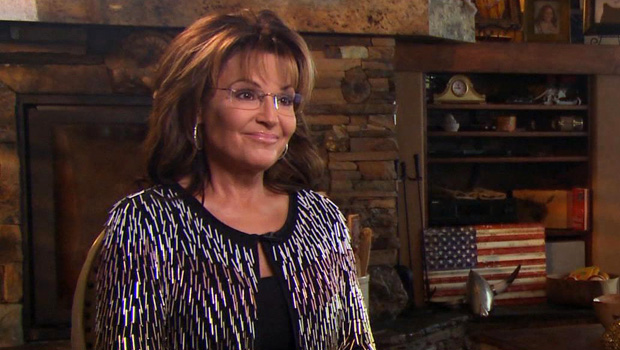 Former Governor Sarah Palin of Alaska is not among the many Republicans running for President this time around. But she says she's keeping her long-range options open. Tracy Smith visited with Palin on her home turf:

"Isn't it a gorgeous view? I love wakin' up to this every day," said Wasilla, Alaska's most famous private citizen, who still lives in the same house -- the one she bought before she was a household name.

Smith asked, "After the loss in 2008, did you come back here to kind of nurse your wounds?"

"Came back here, man, 'cause gotta get back to real life, you know?"

"Well, sure. I mean, you either win or you lose, and it's, like, 'Dang, I wish I coulda added more, contributed more positively.' Maybe there was no chance that we were gonna win anyway."

"Well, it takes a team to win, so it takes a team to lose," said Palin. "I was part of a team that came in second outta two. So, yes, yeah, I mean, semantics, okay, words matter. You either win or you lose. We lost. That makes you not a winner. At that time."

It all began, of course, in the Summer of 2008, when Senator John McCain picked Alaska Governor Sarah Palin, a feisty 44-year-old mother of five, to be his running mate.

"They say the difference between a hockey mom and a pitbull -- lipstick."

At that moment, she had a lot going on in her private life: Palin's oldest son was bound for Iraq; she had a new baby with special needs; and she'd just found out her unmarried teen daughter, Bristol, was pregnant.

Palin was new to national politics, and sometimes it showed. Her every stumble was immortalized, and lampooned. ["I can see Russia from my house!" intoned Tina Fey on "Saturday Night Live."]

She also took a lot of the heat for this awkward moment with then-CBS News anchor Katie Couric:

Couric: "When it comes to establishing your world view, I was curious, what newspapers and magazines did you regularly read before you were tapped for this, to stay informed and to understand the world?"
Palin: "I've read most of them, again with a great appreciation for the press, for the media -"
Couric: "But like, which ones specifically? I'm curious that you -"
Palin: "Um, all of 'em, any of 'em that, um, have, have been in front of me over all these years. Um, I have --"
Couric: "Can you name a few?"
Palin: "I have a vast variety of sources where we get our news. Alaska isn't a foreign country, where it's kinda suggested, it seems like, 'Wow, how could you keep in touch with the rest of Washington D.C. may be thinking and doing when you live up in Alaska?'"

Smith asked, "So, do you think, was that a fair question?"

"Sure, yeah," Palin replied. "I had a crappy answer. But it was a fair question. I didn't like, though, the way that forever then in these seven years that interview has kinda been stamped on my forehead, as 'She's an idiot.' I just think in the context of the whole ball of wax that day, or two days of an interview and editing, it wasn't real fun."

And in the end it wasn't even close.

If 2008 was a hard year for Palin, 2015 hasn't been much better. She lost her job as a commentator for Fox News. And this past May, her daughter Bristol's wedding to Marine Medal of Honor recipient Dakota Myer was called off.

"You mentioned that one of your disappointments this year was Bristol's wedding falling through," said Smith.

"That can't be how you saw this playing out -- unmarried and pregnant again?"

"Heck, no," said Palin. "Because being a single mom is, oh my goodness, my heart goes out to the single parents. But my enormous admiration for what it is that they're able to accomplish doing double-duty. And I watch Bristol do double-duty all the time, you know, with her little boy, Tripp.

"I can't wait for about 45 more days, and I'm gonna have a little baby granddaughter. And I'm happy about it."

"Of course, there are those who say, 'Come on, this goes against everything you stand for.'"

"Well, the cool thing about puttin' your faith in God is, He certainly is a God of second chances, and third, and fourth, and fifth chances. I screw up all the time."

She says she turns to scripture to help her through tough times, and as she writes in a new book, "Sweet Freedom: A Devotional" (Regnery), she's had her share.

"I think that this book hopefully will express some of that because there's a lot of admittance of the mistakes," said Palin. "There's admittance in the book about things that, 'Oh, yeah, I orchestrated that one. I pushed it too far. And I screwed it up.'"

Palin's political future may be cloudy right now, but her opinions are as clear as ever.

Smith said, "There's this feeling that maybe, instead of contributing to making things work, that you're part of the problem of people not being able to find a solution."

"Because some of my comments are probably very candid and perceived as caustic to some. I do that because I know that I speak for a whole lotta people who are thinking the same thing but don't have a microphone or a stage and they want somebody to say it. And I'll say that, and I'll call people out for doing something stupid, and I'll use the word 'stupid.'"

"Do you worry that that's too divisive?"

"I think too many people worry about being too divisive, or they worry about the politically-correct police who will tell them, you know, to, 'Sit down and shut up because you're politically incorrect.' I'm like, 'That's part of the problem in our country right now.'"

Smith asked, "If you had to choose one standout candidate in the GOP field, who would it be?"

"Right now, I would say that fighter is Donald Trump, because he's got nothin' to lose," Palin replied. "He doesn't have to be bought or sold, obviously, especially when it comes to contributions. He is his own man."


But at the moment, there are more important people in Palin's life. Trig, her youngest, is now seven.

Being a full-time mom never slowed her down before, and it doesn't now. "I still usually write something every day for my Facebook page," she said, "because I wanna keep our five million people who we reach informed about issues that I think they need to start talkin' about."

And then, she tells Trig, "my goodness, before we know it, it's time to give you a bath, right? Is that fun? bath? How 'bout brushin' teeth? No. Doesn't like that, either!"

Would Palin leave this to go back on the campaign trail?

"This will always be home," she said. "I would know that I could always come back here."

Translation: She'd jump at the chance.

Palin really can't see Russia from her house -- she never actually said she could. But what she can see is even better.

"You see a lotta silver lining here, don't you?" Palin said. "You see, you know, there's clouds but, man, there's light comin' through the clouds all the time. And I have an illustration every day here in Alaska of beauty in more ways than one. I look around and I get to see the beauty of God's creation and, man, it makes me appreciate it."