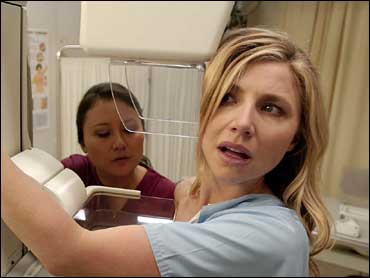 Sarah Chalke can officially say she's got the doctor-patient thing down. Most people know her as the sassy, sometimes zany Dr. Elliot Reid on the NBC comedy "Scrubs," but now she's taking a whack at playing the patient in a new Lifetime movie, "Why I wore Lipstick To My Mastectomy," based on a touching memoir written by breast cancer survivor Geralyn Lucas.

In the movie, airing tonight at 9 p.m., Chalke plays Lucas, a successful 27-year-old TV producer who is faced with a shocking cancer diagnosis. Lucas, who is now an executive at Lifetime, wore red matte lipstick to her mastectomy surgery.

Wearing the lipstick, says Chalke, was a bold statement about her approach to the disease.

"She wore it to her mastectomy because she really felt like she wanted to be out of context in the sterile operating room, she didn't want to be just another procedure, you know, mastectomy, right side," Chalke told The ShowBuzz. "She wanted to be this woman in red lipstick who was going to wear it again — but in her own terms next time. She had it on as her war paint."

For Chalke, reenacting Lucas' experiences was challenging on a personal level.

"I lost both my aunt and my grandmother to breast cancer, both because it was not detected early enough," she said. "But it was really challenging in the sense that you really have to go through all the different stages — of hair loss, different wigs and filming in the real hospitals, real chemotherapy rooms. And after having been through cancer with people who I love, it was really difficult to go back there. That was probably the most difficult part for me."

Chalke, who had originally heard about Lucas' story via a "Today" show segment, read her book four times to prep for the role. Eventually the actress and real-life cancer survivor struck up a friendship. Their first meeting was rather intimate.

"She called me the night before and she's like, 'What are you missing? You've been in Toronto for a month and you don't have any clean underwear left, do you?' She showed up the next day on the set with this big bag of underwear for me. It was the funniest, most generous thing," said Chalke.

Chalke said that Lucas will remain a friend for life. "She's so unbelievably gutsy, but somehow she takes the fear out of this situation," she said.

Chalke hopes that women who see the film will be prompted to do regular breast exams. "I had never done one, and now I do them all the time. I think if you're young and you don't have a family history, you somehow feel immune," she said.

Chalke's costar, Patti LaBelle, who makes a cameo as a fellow cancer patient, is all too familiar with how cancer can pervade one's life. "Patti was the most incredible ball of energy when she came to the set," says Chalke. "She just told all these stories of how she had lost her sisters and her mother (to the disease) — all three of her sisters. It just blew my mind that one person would have to deal with so much. She was really a special person to meet."

With an enlightening filming experience now under her belt, Chalke is back on the set of her regular gig, "Scrubs," but she admits that things are never ho-hum on that set.

"We're actually doing a musical episode right now. A patient comes to the hospital with a brain aneurism and so she hears everything in song, which is actually a true story of what happened to someone," said Chalke, adding that a composer from Avenue Q wrote all the music for the episode. "We've been singing and dancing all week. We have 50 background dancers and it's amazing. It's really fun."

Even with all of the time she's spent in hospitals and operating rooms as an actress, Chalke says medical mumbo-jumbo is still all Greek to her.