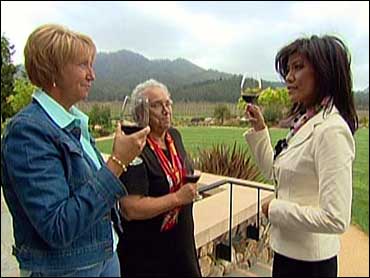 Drive over the Golden Gate Bridge, head north for 60 miles and you get to Santa Rosa, in the heart of California's wine country.

As The Early Show co-anchor Julie Chen learned when she visited for the series "Tour My Town," the scenery is stunning — and the pace, slow.

Resident Kathi Aitchison made Santa Rosa sound like paradise when she wrote, asking The Early Show to stop by.

She called it "one of the most perfect places to live. Not too hot, not too cold. … We've got mountains, redwood trees. We're rich in California history. … You won't be disappointed."

Was she ever right!

Aitchison told Chen that Santa Rosa is small-town America, and "about as normal as it gets."

That, says local historian Gaye LeBaron, is why so many extraordinary people seeking ordinary lives settle in Santa Rosa, where celebrity is taken in stride.

Actor/comedian Robin Williams is raising his family there. So is football great Joe Montana, whose son was the same basketball team as Aitchison's son.

She'd think nothing, she said, of seeing Montana, his wife and other kids at games.

"I mean," she exclaimed, "they're just people at a basketball game!"

One of Santa Rosa's most famous sons was the late "Peanuts" cartoonist Charles M. Schulz. A brand new museum celebrates his life and characters.

Karen Johnson was a longtime friend and said, despite his fame, "He was such an average guy. … He genuinely had a groundedness about him. … I think he was normal, and he continued that by living in Santa Rosa."

"I think," Aitchison said, "that's the thing about Santa Rosa is, most of us, we're not pretentious"

"Unpretentious, definitely," LeBaron observed, "kind of cool," in the sense of being cool without trying to act it.

"It's not like the towns that you read about in the Midwest, where people just can't wait to get out of town and never go home again. I mean, we've got a town full of people who came from those towns, and they're gonna stay here!"

Looking at a typical breathtaking mountain panorama in the distance from the St. Francis Winery, Aitchison, LeBaron and Chen literally raised a glass to Santa Rosa

"This is just incredible," Chen remarked.

"Isn't it beautiful?" Aitchison agreed. "This is why we love it."

"Do you take it for granted, ever?" Chen wanted to know.

Almost in unison, Aitchison and LeBaron said, "No. No. Never. Never."

One other thing about living in paradise: It's not cheap. The average home in Santa Rosa now costs $700,000.