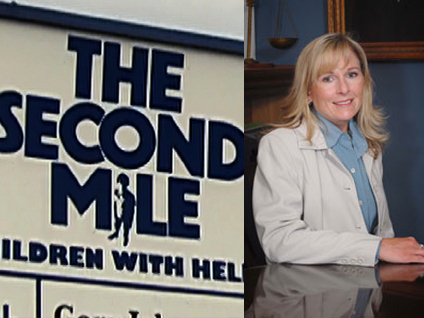 The judge who set a reduced bail for former Penn State coach Jerry Sandusky after he was arrested earlier this month was a volunteer and donor for The Second Mile, the charity organization Sandusky founded.

District Judge Leslie Dutchcot, who released Sandusky on $100,000 bail - far less than the $500,000 requested by prosecutors - names The Second Mile as one of the organizations for which she volunteers, according to her attorney profile on the website of her firm, Goodall & Yurchak.

The link was first reported by the website Deadspin.com.

Dutchcot is a former Assistant District Attorney from Monroe County who received her license to practice law in 2000. She is a graduate of the University of Pittsburgh and attended the Duquesne University School of Law.

According to her profile, she is Vice-President of Centre County Meals on Wheels, a counselor at Centre County Law Enforcement Camp Cadet, Inc., and lists organizations for which she volunteers as The Second Mile, the American Heart Association, and Centre County PAWS.

She and her husband were also listed as donors to The Second Mile in the charity's 2009 Annual Report, having gifted between $500-$999.

The ties between Dutchcot and Second Mile extend beyond volunteering.

In 2007 Robert Stone, the Board Chairman of Second Mile, hosted a fundraiser for Dutchcot in his home, for her campaign for District Judge, according to records of the Committee to Elect Leslie A. Dutchcot.

Stone is president and CEO of S&A Homes, a State College-based homebuilder.

In 1999 he and his wife donated $500,000 to Penn State for endowments marked for the Smeal College of Business Administration, the University Libraries, and the College of Engineering, and in support of the Penn State athletics program.