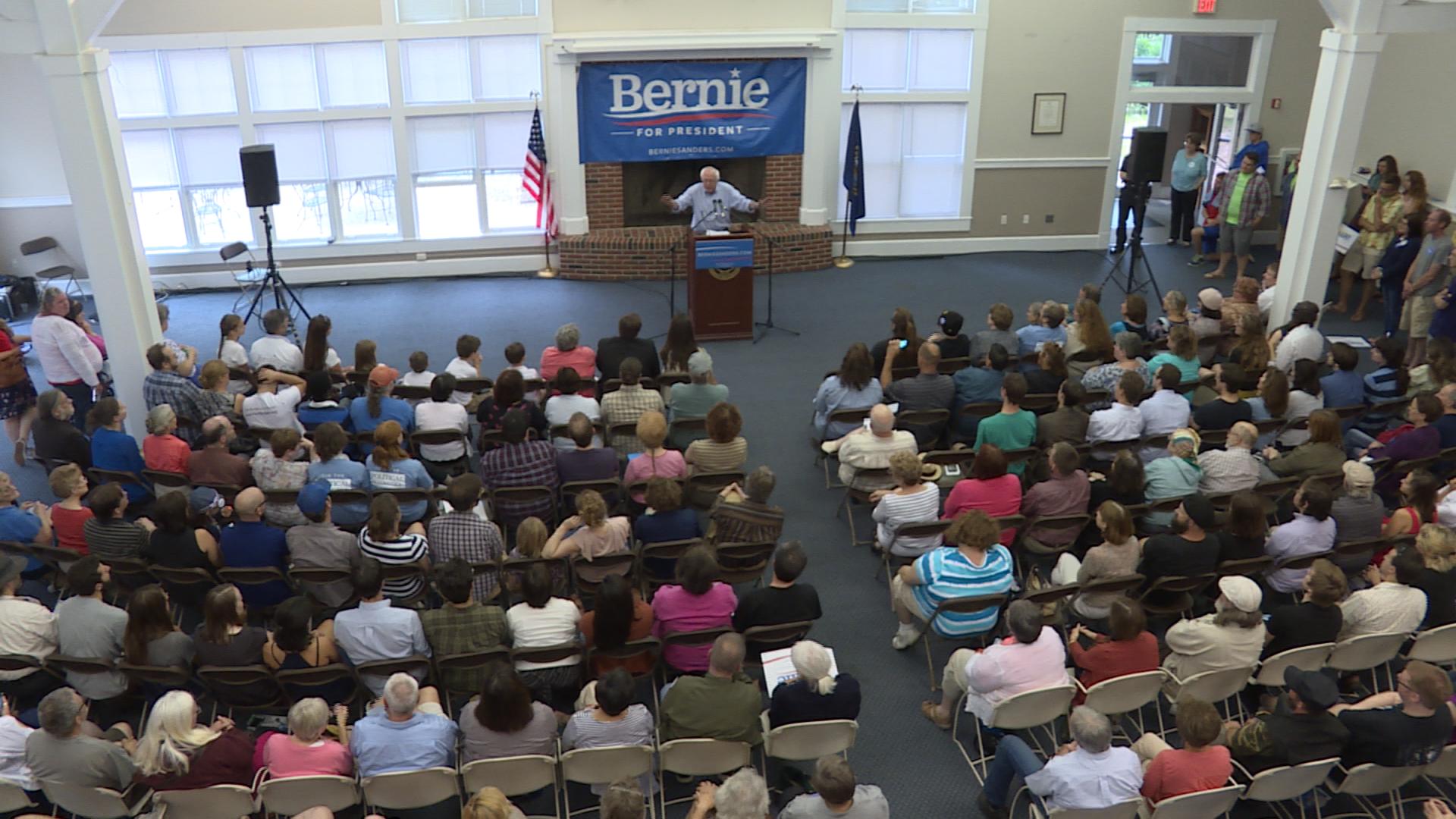 Manchester, New Hampshire -- Bernie Sanders is eliciting some effusive responses from voters: one man called him the "penicillin" that the country needs, while another compared him to Franklin Delano Roosevelt. The independent Vermont senator drew crowds of hundreds this weekend in New Hampshire and, with them, a host of compliments. But Sanders often cut those comments short.

Sanders repeatedly asked voters during his seven-stop, two-day swing to take his vision to their friends and neighbors, even those who are Republican.

There have been stories written about Sanders closing in on frontrunner Hillary Clinton, and one reporter in Rochester, New Hampshire, asked him about the fact that he doesn't bring up the tightening polls. Sanders responded, "We'll let the reality speak for itself...You saw the turnout: 500 people in Nashua yesterday. I think we're doing pretty well."

Sanders has surprised many, even his closest aides, as hundreds, sometimes thousands, of voters have turned out to see him speak in recent weeks.

But in order to take his presidential campaign to the next level, Sanders and his aides will need to turn the crowds' interest in him into something more meaningful.

"The biggest challenge in this campaign," Phil Fiermonte, Sanders' field director, told CBS News on Sunday, "is taking these 200,000 people who want to help Bernie and getting them to be doing constructive activities that are going to help get him elected."

And that means he'll need more than just their votes.

Sanders has a talent, Fiermonte said, for connecting with ordinary voters. Throughout his latest swing through the Granite State, Sanders consistently delivered fiery speeches dotted with wry, witty moments. When one questioner at a stop at a high school in Durham mentioned President Obama, Sanders joked dryly, "Yeah, I've heard of him." But Sanders is mostly serious as he lays out his populist vision.

"He's talking about the issues that are affecting families and seniors and children," said Jane Lang, a senior activist from Salem who voted for President Obama in 2008 and 2012 and had expected to support Clinton in this election. "When I hear Bernie speak, I hear him speaking for the people."

Lang said she's still "shopping" for a candidate to support, but she seemed to be in the minority at Sanders' events.

"My mind is very much made up," said Patrick Duffy, a car salesman from Nashua who attended Sanders' town hall there. "I know I'm not even going to consider any other candidate. I've heard it all before from the other candidates."

But one of those other Democratic candidates has a distinct advantage in New Hampshire. While Sanders was driving from town to town Saturday, volunteers who support Clinton were fanning out statewide for the campaign's first "Day of Action," which brought dozens of volunteers together to knock on doors and lock in commitments to vote for Clinton, the Democratic frontrunner.

Sanders' campaign is just picking up the keys to its first office in New Hampshire this week, in Concord, and it will soon open its doors to voters who want to learn more, volunteer their time and host house parties or canvass. In Iowa, Sanders has a bigger presence. His campaign announced last Monday that he hired five new Iowa-based staff to help organize and communicate with his supporters there.

"He's riding the wave," said Dante Scala, an associate professor of political science at the University of New Hampshire. "That's fun to do, but ultimately you have to grind it out on the ground. Right now, Clinton's in a better place to do that."

Fiermonte couldn't say how soon the campaign's ground operation in New Hampshire would be up and running, but Sanders said that he will do "his best to run a 50-state campaign."

"We're going to win because we're going to do politics the very, very old fashioned way, the way I always do it," Sanders said to a crowd of 300 in Henniker, N.H. "You win it the old fashioned way: talking to people, knocking on doors, talking on the phone. In order to do that, we need a strong grassroots movement."

Beyond manpower, Scala said that Sanders also needs to prove that he is electable. As President Obama's second term comes to an end, Democratic activists in New Hampshire now have their first chance in years to explore all of the directions that the party could take.

"It's one thing to say you like Sanders' ideas now, in June," Scala said. "It's another thing to be able to say in December and January that Sanders has a legitimate path to not only the nomination, but also to defeat a Republican come 2016."

Bonnie Wright, a supporter from Salem, N.H., said she broke her own rule when she sent Sanders a donation on the day he announced.

"I was concerned at first," she said, "but as I'm looking at the growing momentum I think maybe he can [win]."

Lang said she was torn.

"Then again," Lang said, "I look back at 2008. Everybody said Hillary was a shoo-in and look what happened. We all started working for Obama and we got him in."

Sanders, for his part, seems to be prepared for the long haul. Even with a tight schedule and the next event more than an hour drive away, Sanders lingered at his campaign stops to take question after question from attendees.

"That's his personality," Fiermonte said. "He's a long distance runner, not a sprinter. He runs circles around the 20-year-old folks in the Senate office."