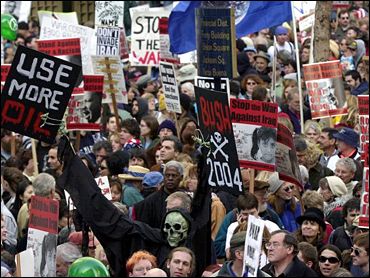 San Francisco voters will have a chance to express their views on the U.S.-led war in Iraq in November with a ballot initiative calling on the federal government to end the conflict.

The toughly worded statement, which will appear on the California city's November ballot, says the war has cost more than 850 American lives and bled the nation of billions of dollars.

"George W. Bush disgracefully lied to the American people to make the case for Iraq," it begins. "His message was one of deceit and fear mongering."

Although several local governments passed resolutions opposing the U.S. invasion of Iraq, San Francisco is the first to submit such a referendum to a citywide vote, according to Chris Daly, the San Francisco supervisor who drafted the measure.

Daly and three other supervisors submitted the ballot measure Tuesday, a day after the U.S.-led coalition transferred sovereignty to an interim Iraqi government. About 135,000 U.S. troops and about 20,000 more from other coalition countries remain in the country.

The approval of four of the 11 supervisors is enough to qualify a measure for the ballot.

Given that San Francisco was the site of some of the nation's biggest protests in the days leading up the war, Daly said he expected it to pass easily.

"Obviously, we aren't voting for Bush here. Everyone knows that," Daly said. "The hope is other people will follow."

In 2000, San Francisco county went for Democrat Al Gore over Mr. Bush by a 76 percent to 16 percent margin, in a state where Gore won 53 percent to 41 percent. The margin in the county between the two nominees was 190,000 votes.

The New York City Council is considering resolutions calling for the immediate withdrawal of U.S. troops and "denouncing the use of torture and other inhumane treatment" at Abu Ghraib.