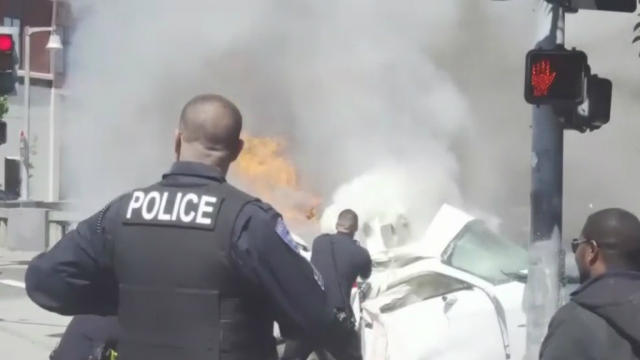 SAN FRANCISCO -- Police say a woman was attacked and kidnapped Sunday in San Francisco but escaped before the suspects led police on a chase across the Bay Bridge that ended in a fiery, fatal crash. CSB San Francisco reports reports the woman was forced into the car's trunk but was able to open it and escape.

San Francisco police Capt. Carl Fabbri says the woman was assaulted by a man and a woman about 3 p.m. Sunday in front of witnesses.

Police spotted the white vehicle and chased it into Emeryville.

Emeryville police Capt. Oliver Collins, says the driver lost control at an intersection, and the car slammed into a light pole and burst into flames.

The driver was pulled from the vehicle, but the passenger died.

The victim was in a San Francisco hospital.