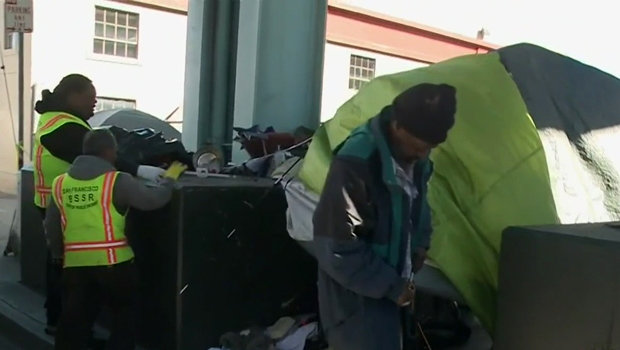 SAN FRANCISCO -- San Francisco health officials declared a tent city that has been growing along a city street a health hazard and gave homeless people living on the sidewalk 72 hours to clear the area.

The Department of Public Health said notices declaring the area along Division Street a public nuisance and encouraging homeless people to move to city shelters would be posted Tuesday.

"Unfortunately, conditions where multiple tents are congregated have become unsafe," said Barbara A. Garcia, the department's director of health. "People are living without access to running water, bathrooms, trash disposal or safe heating or cooking facilities."

An inspection found that people in tents along Division Street between South Van Ness Avenue and 11th Street are living among garbage, human feces, hypodermic needles, urine and other insanitary conditions, the department said.

Though they still have until the Friday deadline to relocate, Rico and several other residents of the area's tent cities were being told to move Tuesday, CBS San Francisco reports.

"The cop told us to move, and we told him, 'Where are we supposed to go?'" Rico told CBS San Francisco. "So he said basically if we don't leave, we're going to jail."

The city moved 25 homeless people into the city's newest homeless shelter at Pier 80, which can house up to 150 people.

"They actually forced us," JoJo, who is homeless, told CBS San Francisco. "I don't know if it is OK, but it was very rude."

Mayor Ed Lee said at least two other encampments in the city would be cleared in the coming weeks.

"We're going to encourage people first to get out of those situations and persuade them, and persuasion generally means a backup by people that will say can't be here," Lee told CBS San Francisco while touring the new shelter.

The health department said its homeless-outreach team has been urging campers to move to Pier 80 or other city shelters and will continue to do so through Friday.